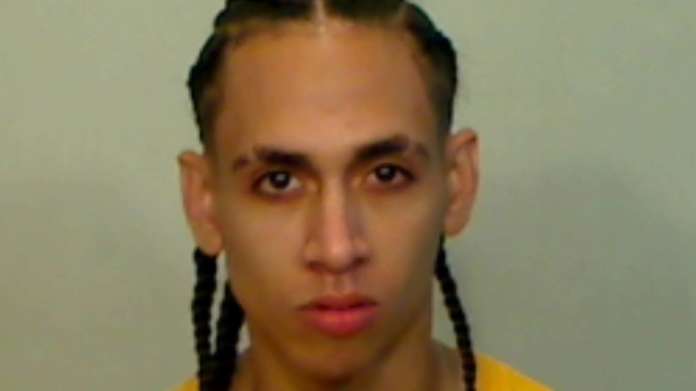 Rickie Santiago Pacheco was charged with grand theft, grand theft of a firearm, burglary while armed and resisting arrest.

Deputies responded to the 1400 block of Ocean Breeze Avenue at 9:14 p.m. where a reporting person stated a backpack worth $150, $1,000 in cash and a .380-caliber handgun had been stolen. The reporting person stated his roommate knows the suspect and that the suspect drives a white Mercedes sedan. Responding Deputy Corbin Hradecky has had previous law enforcement encounters with the roommate and was aware that the roommate knows Pacheco, who drives a white Mercedes sedan. Deputies then responded to the Sea Grape Apartments where they knew from previous encounters that Pacheco lives with a family member.

Deputies Hradecky and Jorge Moreno went to a stairwell near where Pacheco’s apartment. They heard him on the phone speaking to someone about a gun. Pacheco approached the stairwell whereupon Deputy Hradecky asked him to come out and speak with Deputies. Pacheco took flight, went to his apartment and closed the door. Pacheco began mocking Deputies through the door. Deputy Moreno reported hearing what sounded like rounds being chambered in a handgun. A slew of Deputies began responding to the scene as Deputy Hradecky urged Pacheco to come out peacefully as he informed the Sheriff’s Office SWAT Team that they has a possible armed and barricaded subject.

Pacheco then stated he was scared. Deputy Hradecky advised Pacheco to exit the apartment with his hands up and to end any further conflict. Pacheco did so.

A search of the apartment yielded no gun or contraband. A search of the white Mercedes turned up a 9mm Taurus handgun, a .380-caliber magazine with six rounds inside and a small amount of cocaine.

Pacheco admitted to Sgt. Ben Elmore that that he entered the victim’s residence without permission and stole cash and .380 handgun as well as some drugs. Pacheco stated he put some of the stolen items in a garbage bag and had a juvenile at the apartment complex place it in a dumpster. Pacheco stated he flushed most of the stolen drugs down the toilet, but kept some Percocet and stashed them at a friend’s house along with the stolen .380 handgun.

Pacheco was allowed to call the family member he lives with so she could collect the stolen items. She turned over stolen a backpack, the stolen .380 handgun and small amounts of marijuana and cocaine to Deputy Nerelys Vidal.

Pacheco was taken to jail.

Pacheco was just released from jail previously Saturday at approximately 4:23 p.m. after posting $21,000 bail stemming from his Thursday night arrest on charges of carrying a concealed firearm without a license, possessing a firearm while committing a felony, possession of marijuana with intent to sell, possession of drug paraphernalia, contributing to the delinquency of a minor and interfering with the custody of a minor.