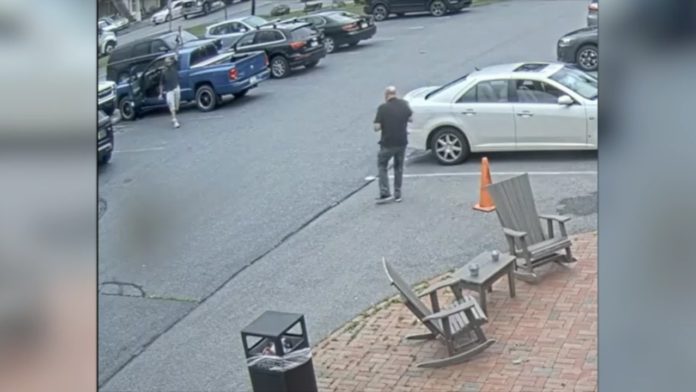 Bethlehem Township, PA — On Friday, around 11:23am, Adam Michael Zaborowski, 35, entered the Cigars International store at 4078 Nazareth Pike, Bethlehem Township, without wearing a face covering against the store’s policy and the Governor’s mandate.

Zaborowski became irate, grabbed two cigars from a shelf and exited the store without paying.

A staff member followed Zaborowski outside calling for him to return the cigars. Zaborowski turned around, pulled out a semiautomatic handgun and fired one round in the air then two rounds at the staff member. A patron was sitting behind the staff member as the rounds were fired. No one was injured. Zaborowski then fled in a blue Dodge Dakota pick-up truck.

Zaborowski was identified by Investigators and was located the next day. When confronted, he opened fire on officers with an AK-47 rifle. Troopers “returned fire and struck Zaborowski,” according to a statement from the Pennsylvania State Police. One officer was also injured.

“He is facing serious charges. He is lucky to be alive, considering his actions with law enforcement. He has had a series of events which have caused him stress and depression,” Zaborowski’s Attorney John J. Waldron told CNN. “These are not a defense or excuse. He lost his job, just lost a custody battle for his child and did not cope well with the virus.”

“People deal with stress differently, he did not deal with it appropriately. His family is very supportive. We will have him examined by a Forensic Psychologist and proceed from there.”

“He just wasn’t dealing well with the loss of his job, the loss of his child, just not handling the pandemic well,” Waldron said. “I think he was getting stretched too tight.”

He was charged with attempted murder, aggravated assault, robbery, and reckless endangerment. Due to prior offenses, he was also charged with persons prohibited to possess a firearm. More charges are expected.