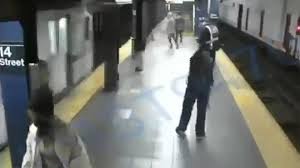 “Today’s sentence makes clear that we will hold accountable those who cause harm in our subway system,” said District Attorney Bragg. “We will remain focused on those who harm straphangers just trying to commute to home or to work.”

As admitted in the defendant’s guilty plea, on November 19, 2020, Vemulapati waited for a train to enter the Union Square station and then ran up behind a stranger and pushed her in front of the oncoming train. The victim landed between the tracks, and several train cars passed over her. She was rescued from under the train by firefighters and was treated at the hospital after an MTA worker radioed for help.

The entire incident was captured on video, and Vemulapati confessed to trying to kill the woman.