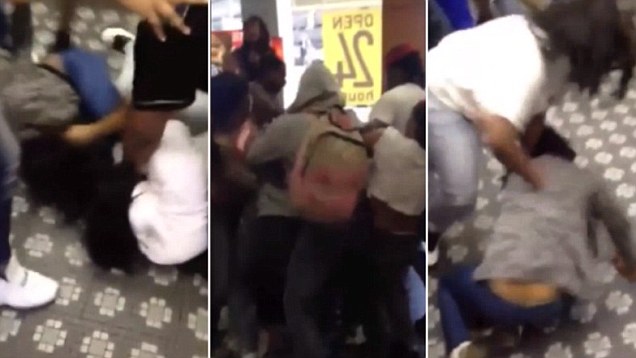 NYC — SCROLL DOWN FOR VIDEO — Two girls at a Brooklyn McDonald’s started fighting last Thursday, one man tried to tear them apart. The older man in a hat tries to diffuse the situation, but is turned on by the teen boys crowding around, who seemed to have been enjoying the fight.

Amir McCants, 24, is now charged with inciting a riot after the Good Samaritan was beaten trying to break up fight.

The video taker is heard on the video yelling, “Kill him!” interspersed with laughs, as the brawl spills outside.

A woman stands in front of him to shield him from the mob. The cameraman shouts, “They can’t help you!”

The video taker posted the video on his Facebook page. He also wrote, “They put that old man in the hospital I feel bad for telling them to kill him,” PIX11 reported.

The 43-year-old man was hospitalized and says he fears for his life. Two other teens have been charged in the assault.