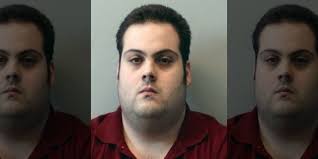 Daniel Frisiello, 25, was sentenced by U.S. District Court Judge Nathaniel M. Gorton to five years of probation, with one year to be served in home detention with location monitoring, and restitution. During the period of probation, Frisiello is prohibited from contacting the victims in the case, sending letters through the mail, accessing the internet, and possessing and accessing computers. In October 2018, Frisiello pleaded guilty to 13 counts of mailing a threat to injure the person of another and six counts of false information and hoaxes. Frisiello was arrested and charged on March 1, 2018, and has been in home detention since.

In 2018, Frisiello mailed five high-profile individuals around the country envelopes that contained suspicious white powder and notes threatening harm. The envelopes and notes had significant commonalities including a Boston postmark. One victim had earlier received a similar “glitter bomb,” that is, an envelope containing glitter sent to an unsuspecting individual that, when opened, spills out onto the recipient. Law enforcement traced the glitter bomb to Frisiello through financial records. In addition, trash recovered from Frisiello’s residence contained remnants of the cut-out computer-printed messages that Frisiello sent to some victims.

Frisiello was tied to other threatening letters through fingerprints and further investigation. In 2015, Frisiello sent two letters that threatened the manager of a Massachusetts company that had recently terminated one of Frisiello’s family members. During the 2016 presidential campaign, Frisiello sent a white-powder letter to family members of then-presidential candidate Donald Trump, which caused a significant hazardous material response by law enforcement in New York City. The letter promised that if Trump did not drop out of the race, the next letter would not be a fake. In 2016, Frisiello also sent letters to the heads of four law enforcement agencies in Connecticut and Rhode Island, warning them to drop an investigation into Nathan Carman, who allegedly killed his mother and grandfather, threatening that one police chief would join Carman’s mother “at the bottom of the sea” and that a state police colonel would not only drown, but also receive “a bullet in [his] brain.” In 2017, Frisiello sent a letter threatening to shoot the assistant district attorney who was prosecuting Michelle Carter for involuntary manslaughter and to also shoot the judge who was hearing the case. In 2018, Frisiello sent white powder letters to another member of the First Family, a United States Attorney, United States Senator Deborah Stabenow, a Stanford law professor, and a candidate for the United States House of Representatives.