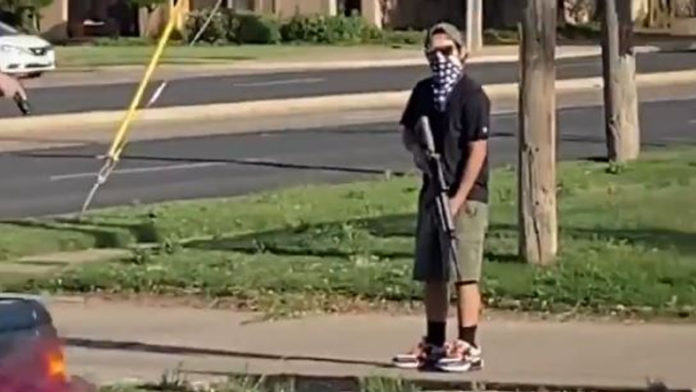 A man who brandished an assault rifle at a Black Lives Matter protest in Lubbock has pleaded guilty to making threats.

Emmanuel Quinones, a 25-year-old local, was charged via criminal complaint in early June and indicted a week later. He pleaded guilty to interstate threatening communications via videoteleconference Friday morning.

According to plea papers, Quinones admitted he brought a loaded Smith & Wesson .223 caliber semi-automatic rifle to a protest decrying the death of George Floyd.

In view of the protesters, Quinones held the rifle at “low ready,” in firing position with the muzzle pointed toward the ground, as panic rippled through the assembled crowd. He refused a Lubbock Police officer’s verbal commands to drop the rifle, and only did so when the officer drew his gun and a protestor moved to tackle him.

Prior to the protest, Quinones admitted, he posted threatening messages online:

In a May 28 Facebook post, he wrote, “While a race riot erupted in Minneapolis the President literally retweeted a video of one of his supporters saying the only good Democrat is a dead Democrat. These people are PUSHING for America to rip itself to shreds. Disgusting. I’ll tell you right now if you keep provoking regular people we’ll make sure you never cross that line ever again. I guarantee it. #MountUp.”

In another post later that same day, he intimated that he planned to obtain gun parts “to off racists and MAGA people.”

Quinonnes now faces up to five years in federal prison.