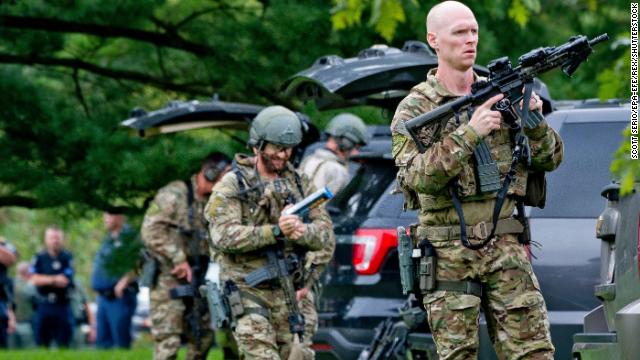 ABERDEEN, MD. — A shooter killed three people, including herself, and wounded at least three others at a Rite Aid drugstore distribution warehouse in Harford County, Maryland Thursday. The shooting occurred 30 miles northeast of Baltimore.

The FBi called the incident an “active shooter situation.” The ATF is also responding.

Deputies were dispatched to the reported shooting at 9:09 a.m.—the Harford County Sheriff says deputies were on scene within five minutes. Officers reportedly never discharged their weapons while responding to the scene.

The shooting suspect is identified as 26-year-old Snochia Moseley–she was reportedly a disgruntled temporary employee.

Rite Aid spokeswoman Susan Henderson said “[…] the location is secure. “The distribution center is where products are received and processed for delivery,” she said. “This is part of a large facility that is a distribution center. The shooting happened adjacent to the primary building.”

A motive for the crime was not known.

Maryland Governor Larry Hogan said, “We are closely monitoring the horrific shooting in Aberdeen. Our prayers are with all those impacted, including our first responders. The State stands ready to offer any support.”

Police told residents in the area to shelter in place but now say the scene is secure. A school in the area was also placed on modified lockdown.

We can confirm there was a shooting in the area of Spesutia Road and Perryman Road. Multiple victims. The situation is still fluid. Please avoid the area. Media staging area still TBD.