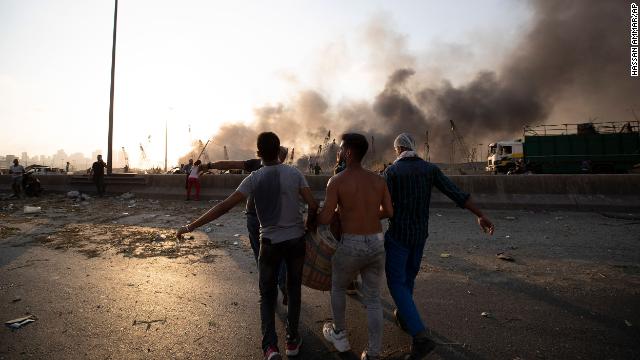 LEBANON — A large explosion rocked Lebanon’s capital Beirut Tuesday afternoon. At least 50 people were killed and nearly 3,000 others were wounded. The blast hit at the city’s port.

The huge event caused widespread panic and extensive damage to the surrounding area.

Lebanon’s interior minister says initial information indicates “highly explosive material seized years ago” blew up, though the cause of explosion won’t be determined until an investigation is complete.

The Israeli Government denied any involvement and has approached the Lebanese government to offer humanitarian and medical assistance.

RAW FOOTAGE: Massive explosion shakes Lebanon's capital Beirut; no word yet on cause or casualties @AbirGhattas

Close to ground zero in this video of the explosion in Beirut. pic.twitter.com/cjgZQ4NBG7

????What just happened in Lebanon!? pic.twitter.com/OMNKAjhQd5

A Powerful explosion has occured in Beirut. It's not yet clear what caused the blast. #Beirut pic.twitter.com/h7ayT5DKdK

These pictures show the scene of an explosion in Beirut, which rattled entire buildings and broke glass, was felt in several parts of the city pic.twitter.com/RAwM7AaxVE

One minute after I woke up two big explosions happened in #Beirut and I found myself flying back from the hit, I thought the building was going down. Anyway, I am ok, not sure what happened all the area around me in Mar Mkhayel is destroyed like my place. pic.twitter.com/JN2i4IYnjH