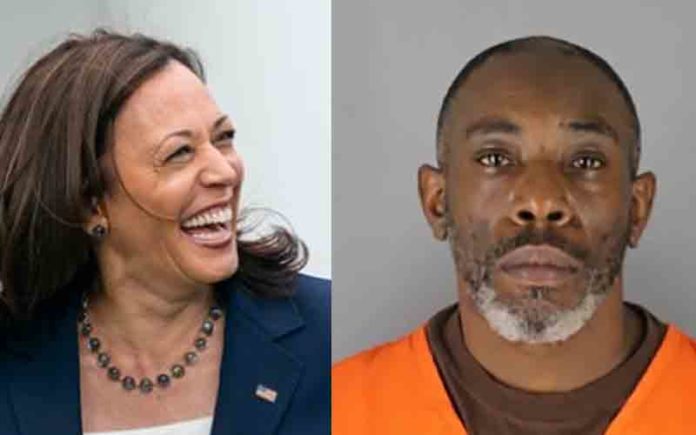 An alleged domestic abuser who was bailed out of the clink by a fund backed by Vice President Kamala Harris has been charged with murder.

According to reports, 38-year-old Luis Damian Martinez Ortiz, of Minneapolis, was fatally shot by George Howard, 48, during a road rage incident on Sunday. Howard was charged with two counts of second-degree murder.

The criminal complaint states: Surveillance video reportedly showed Ortiz, in a blue BMW, and Howard, in a white Volvo, “get into a road rage incident” on the ramp entering the interstate.

Ortiz could be seen getting out of his vehicle and approaching Howard’s vehicle. Ortiz then collapsed and Howard could be seen driving away. Ortiz got back into his vehicle, drove down the ramp and subsequently crashed, surveillance video showed.

Investigators spoke with that passenger who drove the Volvo away from the gas station. The passenger told investigators Ortiz allegedly punched Howard before Howard allegedly fired a shot and left the scene.

When investigators interviewed him, Howard admitted to getting into a road rage incident with Ortiz but initially claimed nothing happened. When investigators prompted Howard with the surveillance video, Howard claimed there was yet another passenger in the Volvo who shot Ortiz from the back seat. Investigators reported Howard was unable to provide identifying information about this additional passenger.

From a previous conviction, Howard is prohibited from possessing a firearm.

If you’re able to, chip in now to the @MNFreedomFund to help post bail for those protesting on the ground in Minnesota. https://t.co/t8LXowKIbw

The Harris-backed Minnesota Freedom Fund responded to the news with this statement: “We are aware of reports of the tragic and fatal shooting in Minneapolis earlier this week allegedly involving George Howard, an individual the Minnesota Freedom Fund had previously provided with bail support. MFF believes that every individual who has been arrested by the law enforcement is innocent until proven guilty, and if a judge deems them eligible for bail, they should not have to wait in jail simply because they don’t have the same income or access to resources as others.”

“Under new leadership, MFF has implemented changes to its policies and procedures, and we will continue to assess them to ensure that we are being responsive to the safety and needs of our community.”