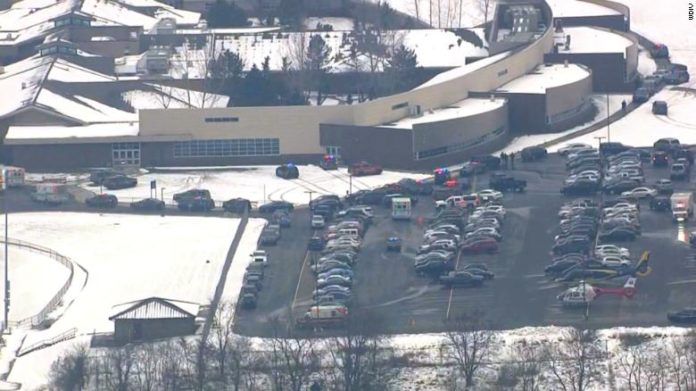 Oakland County Undersheriff Michael McCabe said at a news conference that officers arrived in minutes and the 15-year-old shooter gave himself up without incident. The Undersheriff said the suspect invoked his right to remain silent and asked for an attorney.

“The [shooter] was in class today,” McCabe  said. “Most of the shootings happened in the south end of the school. We don’t know if they were targeted.”

Video shared online appears to show students sheltering-in-place inside a classroom. The student who recorded the footage says the voice heard is that of the shooter who was announcing himself as a Sheriff’s Deputy. This is not confirmed.

Video from inside classroom at #oxfordhighschool shows brave students refusing to open door for apparent shooter who was identifying himself as a Sheriff’s Deputy.

Student says voice you hear is that of the shooter. He says he’s sheriff deputy. https://t.co/evmxxX5OeO

There was a massive police response to the incident, including SWAT and aviation units.

The Oakland County Sheriff’s Office initially said there were between 4-and-6 victims and “one shooter” in custody.

The following is the initial statement from the Oakland County Sheriff Office: “We responded to an active shooter at Oxford High School in Oxford Township at 12:55PM today. We have one suspected shooter in custody along with a handgun. We do not believe there are any other at this time. There are multiple victims (4-6). No confirmed fatal shooting victims at this time. News media can stage in the parking lot across the street from the Meijer next to McDonald’s at 655 N. Lapeer Rd.”

“We are still doing a secondary search of the school for any further victims. All evacuated students will be located at the Meijer store for reunification with parents or relatives.”

The Michigan State Police is aware of the incident taking place at Oxford High School. The Oakland County Sheriff Office is the primary agency for this incident. There is always a large amount of confusion and misinformation as these on going incidents unfold. 1/ pic.twitter.com/Rv1eBsz3qP

There is no known motive for the attack. The scene remained active and residents were asked to avoid the area.