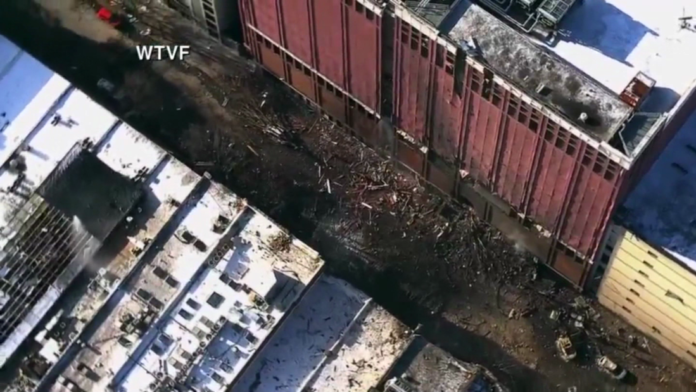 NASHVILLE — The Metropolitan Nashville Police Department, the FBI, and the ATF are investigating the bombing that shook downtown Nashville on Christmas Day.

The attack occurred at 6:30 a.m. local time when an RV outside 166 2nd Avenue North downtown exploded.

United States Department of Homeland Security: “We are aware of and monitoring the situation in Nashville. Public is urged to follow instructions from local officials.” pic.twitter.com/pQP0VI7N9F

Officers responded to a shots fired call on 2nd Avenue at 5:30 a.m. and upon arrival, heard a warning message being played from the RV, “If you can hear this message, evacuate now. This area must be evacuated now,” a woman’s voice said. Witnesses say there was also a countdown that began for 15 minutes before the blast.

The responding officers called in the department’s Hazardous Devices Unit (bomb squad) to check the RV. Meanwhile, the officers on scene started to evacuate people near the RV, likely saving lives.

The recorded message was captured on surveillance video. Watch below.

Investigators say police responded to reports of shots fired this morning in downtown Nashville. Audio was heard coming from a RV saying a bomb would be going off in 15 minutes. The RV blew up. 3 people are wounded. Several buildings damaged. pic.twitter.com/XmegZYA48X

The heroic officers have been identified as:

As the bomb squad was en route, the vehicle exploded outside an AT&T transmission building. Multiple buildings on 2nd Avenue were damaged, some extensively, and debris flew for blocks.

At least three people were injured, but miraculously, there were no confirmed fatalities.

Later in the evening, police released a photo of the RV and 500+ tips began to flood in.

BREAKING PHOTO: This is the RV that exploded on 2nd Ave N this morning in Downtown Nashville. It arrived at 1:22 a.m.

CALL FBI IMMEDIATELY IF YOU HAVE TIPS! pic.twitter.com/mjWEyjOsPZ

The tips led police to a home in the Nashville neighborhood of Antioch. A Google street-view search of the address on Bakertown Road showed an RV in the driveway similar to the one that exploded.

A bomb squad cleared the home Sunday and investigators began searching for evidence\. No one was at the home and no suspects were in custody.

The “person of interest” in the bombing has been identified as 63-year-old Anthony Quinn Warner, CBS news first reported. Neighbors described Warner as a quiet person who kept to himself.

Heavy reported: The neighbor told Heavy that Warner told her once that he “worked for himself in computers. That was a long time ago.” She also said she believed he was “self-employed in IT.”

The neighbor said Warner had no family – no wife or kids that she knew of. She said he ‘was very good to the animals he had.” She said he had little dogs, and “when they got older, he built them a ramp so they wouldn’t have to climb.”

The neighbor said she “was shocked to see the ATF and FBI” at the home. Adding, “It’s a little quiet neighborhood street.”

The unidentified woman told the news outlet he would “park it in his backyard and then move it. A couple days ago, I noticed it was moved.”

In a news conference Saturday, police would not confirm if Warner was indeed the suspect; “At this point, we’re not prepared to identify any single individual.”

The FAA has classified the airspace around Nashville bombing scene as “National Defense Airspace,” saying “deadly force” could be used against violators. pic.twitter.com/L0S0hUDS9g

A motive for the attack remains a mystery but investigators believe it was suicide bombing.

NEW: President Trump & President-Elect Biden have both been briefed on the Nashville bombing.

Anyone with information about the explosion is asked to report those tips here.

Our canine teams are doing protective sweeps in the downtown area. Traffic downtown is restricted. pic.twitter.com/SAH25JZwIg