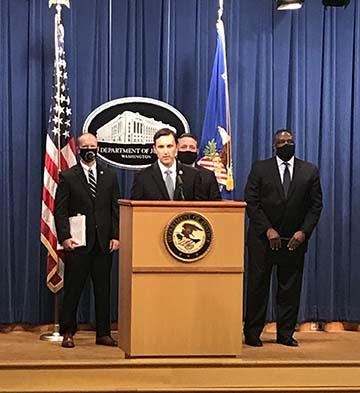 Today’s enforcement actions were led and coordinated by the Criminal Division, Fraud Section’s Health Care Fraud Unit, in conjunction with its Health Care Fraud and Appalachian Regional Prescription Opioid (ARPO) Strike Force program, and its core partners, the U.S. Attorneys’ Offices, HHS-OIG, FBI, and DEA, as part of the department’s ongoing efforts to combat the devastating effects of health care fraud and the opioid epidemic.  The cases announced today are being prosecuted by Health Care Fraud and ARPO Strike Force teams from the Criminal Division’s Fraud Section, along with 43 U.S. Attorneys’ Offices nationwide, and agents from HHS-OIG, FBI, DEA, and other various federal and state law enforcement agencies.

“This nationwide enforcement operation is historic in both its size and scope, alleging billions of dollars in healthcare fraud across the country,” said Acting Assistant Attorney General Brian C. Rabbitt.  “These cases hold accountable those medical professionals and others who have exploited health care benefit programs and patients for personal gain.  The cooperative law enforcement actions announced today send a clear deterrent message and should leave no doubt about the department’s ongoing commitment to ensuring the safety of patients and the integrity of health care benefit programs, even amid a national health emergency.”

“Telemedicine can foster efficient, high-quality care when practiced appropriately and lawfully.  Unfortunately, bad actors attempt to abuse telemedicine services and leverage aggressive marketing techniques to mislead beneficiaries about their health care needs and bill the government for illegitimate services,” said HHS Deputy Inspector General Gary Cantrell.  “Unfortunately, audacious schemes such as these are prevalent and often harmful.  Therefore, collaboration is critical in our fight against health care fraud.  We will continue working with our law enforcement partners to hold accountable those who steal from federal health programs and protect the millions of beneficiaries who rely on them.”

“The FBI, together with our federal, state, and local partners, remains steadfast in our commitment to identify and root out health care fraud, no matter what form it takes,” said Assistant Director Calvin Shivers.  “We will continue to work tirelessly to ensure public and private health care dollars are used as intended, to promote the health and safety of all Americans and safeguard continued access to critical health care services.”

“The opioid epidemic our country is battling is exacerbated when unscrupulous individuals seek to profit from people, in particular those confronting addiction.” said DEA Assistant Administrator Tim McDermott.  “When doctors, pharmacists, and individuals exploit the weakness of a fellow human being in order to line their own pockets, DEA will use every tool at its disposal to stop and bring them to justice.”

The largest amount of alleged fraud loss charged in connection with the cases announced today – $4.5 billion in allegedly false and fraudulent claims submitted by more than 86 criminal defendants in 19 judicial districts – relates to schemes involving telemedicine:  the use of telecommunications technology to provide health care services remotely.  According to court documents, certain defendant telemedicine executives allegedly paid doctors and nurse practitioners to order unnecessary durable medical equipment, genetic and other diagnostic testing, and pain medications, either without any patient interaction or with only a brief telephonic conversation with patients they had never met or seen.  Durable medical equipment companies, genetic testing laboratories, and pharmacies then purchased those orders in exchange for illegal kickbacks and bribes and submitted false and fraudulent claims to Medicare and other government insurers.  In addition to the criminal charges announced today, CMS Center for Program Integrity separately announced that it has taken a record-breaking number of administrative actions related to telemedicine fraud, revoking the Medicare billing privileges of 256 additional medical professionals for their involvement in telemedicine schemes.

The continued focus on prosecuting health care fraud schemes involving telemedicine builds on the efforts and impact of the 2019 “Operation Brace Yourself” Telemedicine and Durable Medical Equipment Takedown, which resulted in an estimated cost avoidance of more than $1.5 billion in the amount paid by Medicare for orthotic braces in the 17 months following that takedown.

The “sober homes” cases announced today include charges against more than a dozen criminal defendants in connection with more than $845 million of allegedly false and fraudulent claims for tests and treatments for vulnerable patients seeking treatment for drug and/or alcohol addiction.  The subjects of the charges include physicians, owners and operators of substance abuse treatment facilities, as well as patient recruiters (referred to in the industry as “body brokers”).  These individuals are alleged to have participated in schemes involving the payment of illegal kickbacks and bribes for the referral of scores of patients to substance abuse treatment facilities; those patients were subjected to medically unnecessary drug testing – often billing thousands of dollars for a single test – and therapy sessions that were frequently not provided, and which resulted in millions of dollars of false and fraudulent claims being submitted to private insurers.  Medical professionals also allegedly prescribed medically unnecessary controlled substances and other medications to these patients, sometimes to entice them to stay at the facility.  The patients were then often discharged and admitted to other treatment facilities, or referred to other laboratories and clinics, in exchange for more kickbacks.

The cases announced today involving the illegal prescription and/or distribution of opioids or that fall into more traditional categories of health care fraud include charges and guilty pleas involving more than 240 defendants who allegedly participated in schemes to submit more than $800 million in false and fraudulent claims to Medicare, Medicaid, TRICARE, and private insurance companies for treatments that were medically unnecessary and often never provided.  According to court documents, in many cases, patient recruiters, beneficiaries and other co-conspirators were allegedly paid cash kickbacks in return for supplying beneficiary information to providers, so that the providers could then submit fraudulent bills to Medicare.  Also included are charges against medical professionals and others involved in the distribution of more than 30 million doses of opioids and other prescription narcotics.

Prior to the charges announced as part of today’s nationwide enforcement action and since its inception in March 2007, the Health Care Fraud Strike Force program had charged more than 4,200 defendants who have collectively billed the Medicare program for approximately $19 billion.