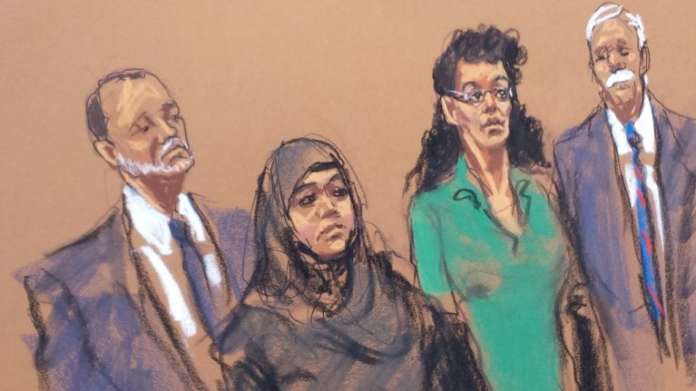 Earlier today, at the federal courthouse in Brooklyn, Asia Siddiqui and Noelle Velentzas, both citizens of the United States and residents of Queens, pleaded guilty to teaching and distributing information pertaining to the making and use of an explosive, destructive device, and weapon of mass destruction, intending that it be used to commit a federal crime of violence. When sentenced, the defendants face up to 20 years in prison.

“Inspired by radical Islam, Velentzas and Siddiqui researched and taught each other how to construct bombs to be used on American soil against law enforcement and military targets,” said Assistant Attorney General John C. Demers. “They were thwarted by the excellent work of the agents, analysts and prosecutors who are responsible for this investigation and prosecution. For this, we are grateful.”

“In an effort to implement their violent, radical ideology, the defendants studied some of the most deadly terrorist attacks in U.S. history, and used them as a blueprint for their own plans to kill American law enforcement and military personnel,” stated United States Attorney Richard P. Donoghue. “Thanks to the tireless work of law enforcement, they were stopped before they could bring their murderous plans to fruition.”

“Velentzas and Siddiqui were intent on waging violent jihad here in the United States, researching at length historical terrorist attacks on U.S. soil, educating themselves on how to turn propane tanks into explosive devices, and dreaming up plans to kill Americans on our own turf,” stated FBI Assistant Director-in-Charge William F. Sweeney Jr. “Today’s plea is not only a welcome end to this years-long investigation, but a credit to the FBI’s JTTF in New York and our many law enforcement partners who saw this through to the end.”

“This investigation and the subsequent guilty pleas are yet another example of how each day the NYPD and members of the Joint Terrorism Task Force remain vigilant and relentless in their efforts to protect New York City and keep America safe,” stated NYPD Commissioner James P. O’Neill. “I want to commend our law enforcement partners and the U.S. Attorney’s Office for the Eastern District for helping to bring these individuals to justice.”

Between approximately 2013 and 2015, Velentzas and Siddiqui planned to build a bomb for use in a terrorist attack in the United States. In furtherance of their plan, the defendants taught each other chemistry and electrical skills related to creating explosives and building detonating devices; conducted research on how to make plastic explosives and how to build a car bomb; and shopped for and acquired materials to be used in an explosive device. They discussed similar devices used in past terrorist incidents, including the Boston Marathon bombing, Oklahoma City bombing and 1993 World Trade Center attack, and they researched potential targets of attack, focusing on law enforcement and military-related targets.

Siddiqui’s interest in violent terrorist-related activities was reflected in her written submissions to a radical jihadist magazine edited by Samir Khan, a now-deceased prominent figure and member of the designated foreign terrorist organization, al-Qaeda in the Arabian Peninsula (AQAP). Velentzas similarly espoused violent rhetoric, praising the attacks of Sept. 11, 2001, and stating that being a martyr through a suicide attack guaranteed entrance into heaven. Velentzas specifically singled out government targets stating, “you go for the head” when you commit a terrorist attack.

“Why we can’t be some real bad bitches?” Velentzas reportedly said to an acquaintance while pulling a knife from her bra.