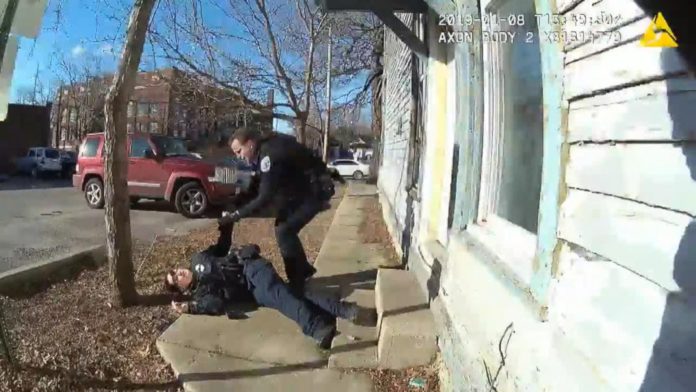 LAFAYETTE, Indiana — (Scroll Down For Video) — On January 8, officers of the Lafayette Police Department were conducting an investigation that led them to 813 N. 9th St. During the course of this investigation it was determined that a subject who was wanted on a warrant was possibly residing or visiting the apartment.

The homeowner was cooperative and allowed officers to search her apartment to show them the wanted person was not there. Inside of this residence was a very large dog. The dog was confined to a cage and the resident verified this for officers before the officers entered the home.

Three officers entered the apartment to search for the wanted subject. During the course of their search the dog broke free from the cage, which caused the officers to flee the apartment to avoid a confrontation with the animal. As they fled out the door a round was discharged from one of the officer’s firearms. The round traveled through the apartment door and struck Officer Lane Butler in the back. Officer Butler was wearing a protective vest, however, the round struck her above the protected area.

Officer Butler was transported to a local hospital for treatment where she is in serious, but stable, condition.

Officer Kurt Sinks (badge# 367) is an eleven year veteran of the Lafayette Police Department. Officer Aaron Wright (badge #435) is a two year veteran of the department. Initial findings of the investigation reveal the round that struck Officer Butler in the back came from Officer Wright’s department issued handgun. Both Officers immediately rendered aid to Officer Butler.

In following department policy, Officer Aaron Wright has been placed on paid administrative leave pending the outcome of the findings in the internal investigation and the shooting review board.

The dog involved in this incident was not injured.