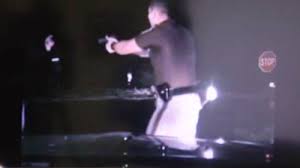 OKLAHOMA — SCROLL DOWN FOR VIDEO — Authorities say a dashcam video shows officers were assaulted before fatally shooting a 35-year-old pastor.

35-year-old Nehemiah Fischer was shot and killed Friday night after allegedly fighting with Officers who were attempting to rescue him from flood waters.

Fischer and his brother were attempting to push a stranded car out of the flood waters when Troopers asked them multiple times to get out of the dangerous waters. Fischer became violent and an altercation ensued.

After the driver assaulted the Officer, another Trooper opened fire, killing Fischer.

Brandon Fischer, the suspect’s brother, was arrested at the scene. KOKI-TV reported that he was booked into the Okmulgee County Jail for assaulting a police officer and public intoxication.

According to an Associated Press report, a weapon was recovered from one of the suspects.

Neither trooper was injured. And neither had been placed on leave as of Saturday afternoon.

An investigation is ongoing.