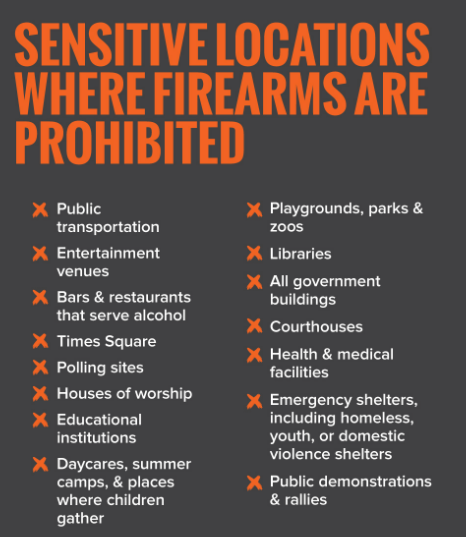 “In response to the Supreme Court’s decision to strike down New York’s century-old concealed carry law, we took swift and thoughtful action to keep New Yorkers safe,” Governor Hochul said. “I refuse to surrender my right as Governor to protect New Yorkers from gun violence or any other form of harm. In New York State, we will continue leading the way forward and implementing common sense gun safety legislation.”

“New York is leading the way in the fight to reduce gun violence and save lives,” said Lieutenant Governor Antonio Delgado. We want to ensure that all members of our communities are safe, and these new conceal and carry laws will help prevent tragedies by ensuring that gun owners are properly trained, that safety measures are promoted and that firearms are not carried into sensitive locations.”

Governor Hochul also announced new permitting and minimum age requirements related to ownership of semiautomatic rifles taking effect Sunday, September 4, 2022. After that date, an individual must be at least 21 years old and have a permit prior to purchasing or taking possession of a semiautomatic rifle. These new requirements were included in a package of legislation signed by the Governor in response to the racially motivated mass shooting in Buffalo this spring. Licenses are not required for individuals who possessed semiautomatic rifles before September 4, 2022.

For more than 100 years, New York required individuals seeking concealed carry permits to undergo background checks, which included checking whether they had any criminal convictions that could disqualify them gun ownership, and character references. In response to the Bruen decision, the state has standardized and strengthened the background checks required for concealed carry permits by requiring four character references; a list of former and current social media accounts for the last three years; disclosure of applicant’s spouse or domestic partner, any other adults residing in the applicant’s home, including any adult children of the applicant; and an in-person interview with their licensing officer or designee. Licensing offers may request any additional information they deem appropriate.

The firearm training requirement applies to all concealed carry permit applicants on or after September 1, 2022 and includes individuals who live in New York City and Nassau, Suffolk and Westchester counties and are required to renew their permits. The 16-hour classroom and two-hour, live-fire firearm safety training course must meet the state’s new minimum standards. These standards are designed to provide licensed firearm owners the skills and knowledge necessary to safely store and carry their firearms, and educate them about other topics, including conflict de-escalation, suicide prevention and use of deadly force, that will help keep them and others safe.

Individuals who currently have concealed carry permits and recertify those permits with the New York State Police are not required to complete this new training. Renewal and recertification of concealed carry permits is now required every three years instead of five. By year’s end, the State Police plan to institute an online recertification process for permit holders.

State Police Superintendent Kevin P. Bruen said, “We truly value Governor Hochul’s leadership and resources she has provided that have allowed us to aggressively crack down on the transit of illegal guns into our state. Troopers remain committed to this mission, and we are dedicated to stopping the criminals who traffic illegal guns and endanger our communities.”

Division of Criminal Justice Services Commissioner Rossana Rosado said, “We have seen the devastation and trauma caused by gun violence in our communities and we need to do all we can to stop it. We thank Governor Hochul for her leadership on this issue and are proud to stand by her, for the safety of all New Yorkers, as we work with our partners in law enforcement and local governments to institute these common sense safety and training rules for licensing.”

Senate Majority Leader Andrea Stewart-Cousins said, “In response to the Supreme Court’s decision, implying that guns are more important than lives in this country, we passed legislation to ensure that New York State has safe and responsible gun laws. States are the last line of defense, which is why we stepped up to protect New York from being easily flooded with concealed weapons and keeping firearms out of the wrong hands. These measures, in addition to the previous anti-gun violence legislation we passed, are vital in a time when there are more guns than people in America. New York will continue to prioritize people’s safety and lives, and I thank my conference, Speaker Heastie, and Governor Hochul for their partnership.”

Assembly Speaker Carl Heastie said, “The Supreme Court and the gun lobby may value access to guns over the lives of Americans but here in New York we are making a strong statement that this is unacceptable. This law will help keep New Yorkers safe in public spaces – not just schools and government buildings, but in grocery stores, public transportation, restaurants and places of worship. We will continue fighting to protect people from gun violence and to help keep families safe in their communities.”

New York City Mayor Eric Adams said, “The U.S. Supreme Court’s Bruen decision was the shot heard round the world that took dead aim at the safety of all New Yorkers. New York City will defend itself against this decision, and, beginning tomorrow, new eligibility requirements for concealed carry permit applicants and restrictions on the carrying of concealed weapons in ‘sensitive locations,’ like Times Square, take effect. We will be posting signage at every entrance into Times Square informing those traveling through that the area is a gun-free zone and that licensed gun carriers and others may not enter with a gun unless otherwise specially authorized by law. As mayor of New York City and a former police officer, my top priority will always be the safety of all 8.8 million people who call this city home, so while the Supreme Court decision may have opened an additional river feeding the sea of gun violence, we are doing everything we can to dam it and keep New York the safest big city in America.”

New Yorkers Against Gun Violence Executive Director Rebecca Fischer said, “Even as the gun industry attacks our sensible gun laws, our communities, and our children, we know we can count on New York State’s leadership to protect us time and time again. In June, the gun-lobby backed U.S. Supreme Court overhauled New York’s concealed carry licensing law, a law that has helped keep New Yorkers safe for over a century. In response, our state took swift action by enacting new laws that will strengthen our public carry permitting process and enable New Yorkers to live safely in sensitive places across New York. We applaud Governor Kathy Hochul for her commitment to addressing the gun violence crisis and to saving lives.”

Everytown for Gun Safety Senior Director of State Government Affairs Monisha Henley said, “As gun violence continues to impact states across the country on a daily basis, policymakers at every level have a crucial role to play in passing common sense gun safety laws to keep their communities safe. Governor Hochul and New York lawmakers continue to lead the country in this fight, and we’re proud to work alongside them as they pave the way for a safer New York.”

Brady President Kris Brown said, “New Yorkers are now safer thanks to Governor Hochul and state lawmakers who have demonstrated extraordinary leadership in taking the necessary steps to protect their communities from gun violence. The Supreme Court’s decision to interfere with New York’s laws — laws that an overwhelming majority of New Yorkers’ support — was egregious. But today, we can breathe easier knowing that the state’s gun laws remain strong and that state leaders are listening to their residents and responding with life-saving solutions.”

Giffords Law Center to Prevent Gun Violence Deputy Chief Counsel David Pucino said, “In the wake of the Supreme Court’s reckless decision to strike down New York’s 100-year-old concealed carry law, courageous lawmakers across the state stepped up. These leaders know that the right to bear arms does not supersede every other right, and that commonsense, evidence-based gun safety laws are not only effective—they’re also broadly popular. The law that goes into effect tomorrow will promote public safety and keep New Yorkers safe, within the bounds set by the Court. We thank Governor Kathy Hochul, Speaker Carl Heastie, Majority Leader Andrea Stewart-Cousins, Mayor Eric Adams, and Speaker Adrienne Adams for their courageous leadership on this life-or-death issue.”

The State Police and state Division of Criminal Justice Services also developed Frequently Asked Questions about the new gun laws for the public, gun owners, and gun dealers. In addition to training and expanded background check requirements, the laws:

The State Department of Environmental Conservation’s website has additional information about how the new laws pertain to hunting and hunting education activities, which include skeet and trap shooting competitions. These activities continue to be legal under the new laws.

The State Police also is working to implement other requirements that take effect in 2023: establishing state oversight for background checks for firearms (July 1); creating statewide permit and ammunition databases (August 1); and partnering with the state Division of Criminal Justice Services to establish an appeals board to review permit denials and revocations.