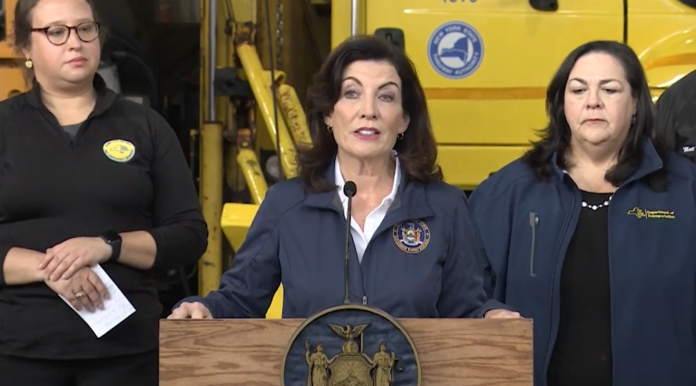 Governor Kathy Hochul today announced a State of Emergency was issued Thursday morning for 11 counties as a winter storm is forecast to impact portions of upstate New York with intense lake effect snow through Sunday. The most significant snowfall is expected Thursday and Friday with accumulations of up to four feet of snow possible in the Buffalo area and up to two feet or more of snow possible in the Watertown area, with snowfall rates of three or more inches per hour. Hazardous travel conditions and local power outages as a result of the storm are likely due to the combination of snow and wind in the forecast. Lightning and thunder may also occur in the heavier, more intense bands. Governor Hochul urged New Yorkers to stay alert and avoid unnecessary travel Thursday evening through Friday, particularly in the Buffalo and Watertown areas.

“We all have to do our part to make sure that everyone stays safe during this winter storm — that’s why I have declared a State of Emergency for impacted counties, which will free up resources and boost our readiness,” Governor Hochul said. “My administration has been preparing around the clock for this potentially life-threatening weather event, bringing in additional safety personnel and equipment, closing down the New York State Thruway, and activating Emergency Operation Centers. I urge all New Yorkers to stay prepared and vigilant over the next few days, making sure to look after vulnerable loved ones and neighbors.”

Lake Effect Snow Warning and Winter Storm Watches are in effect through Sunday evening for several counties in the Western New York, Finger Lakes, Central New York and North Country regions. As of Thursday, the National Weather Service forecast anticipates several feet of snow for multiple locations over the duration of this storm.

New York State Division of Homeland Security and Emergency Services Commissioner Jackie Bray said, “I can’t stress enough the need for anyone in the path of this dangerous snowstorm to take action to prepare for several days of heavy snow, wind, dangerous travel conditions and the potential for power outages. New Yorkers are familiar with this kind of weather, but it’s our first major snowstorm of the season, so let’s please be careful, do your shopping and other errands now before the heavy snow starts falling, if you can, and touch base with friends and neighbors to make sure they are ready for the storm, too.”