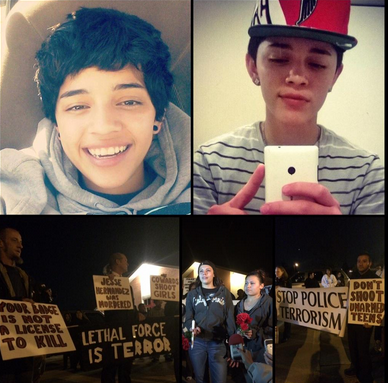 The stolen car was in an alley near 25th Avenue and Newport Street. Police approached the car and the teens tried to drive away, ramming the officer and injuring his leg.

Police said there were five people in the car, “of very young age”. When the car hit the officer, the police began to fire, killing Hernandez, the driver.

State troopers cited Jessica Hernandez on Jan. 1 for speeding down a highway north of Denver in her mother’s car after the girl’s driver’s license had been revoked.

The citation shows Hernandez was driving 80 mph in a 55 mph zone, and the trooper noted that she was resisting arrest in a way that risked serious injury to him or others. It does not provide other details of the case.

Tension over the killing continued to simmer Tuesday as Jessie’s family and friends, as well as Denver clergy and community activists, descended on District Attorney Mitch Morrissey’s office to demand “justice” for the killed teen, claiming she was unarmed, even though the suspect did drive the car at Officers.

So far, police have released few details about the shooting, including whether any of the five teens in the car were armed or who reported the car stolen.

Though initial reports said two people were shot, they were later clarified by Denver PD that the only one person was shot and declared dead upon arrival at the hospital.

A local young lady from the neighborhood said she saw her friend’s motionless body being dragged out of the car and others claim to have video of the incident showing the deceased teen being searched and lifeless.