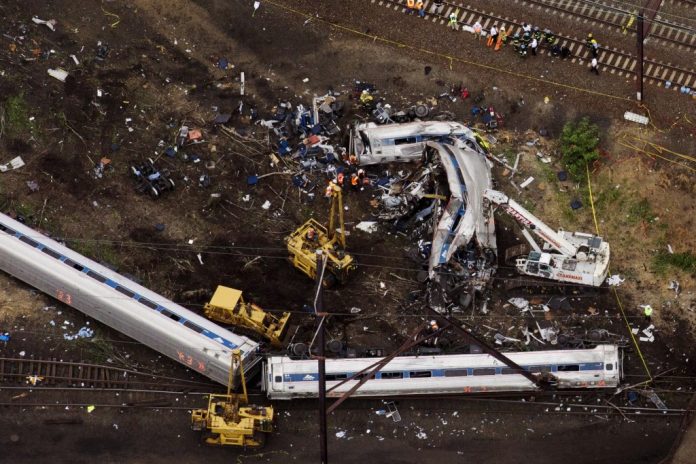 On May 12, 2015, at 9:21 pm eastern standard time, northbound Amtrak passenger train no. 188 derailed at MP 81.62 near Philadelphia, Pennsylvania. The train had seven-cars and one locomotive. The train had just entered the Frankford Junction curve at a speed of 106 mph where the speed is restricted to 50 mph. As the train entered the curve, the engineer applied the emergency brakes. Seconds later, the locomotive and all seven passenger cars derailed. Of the 250 passengers and eight Amtrak employees that were on board, eight passengers were killed and more than 200 others were transported to area hospitals. Damage is estimated by Amtrak in excess of $9.2 million. The weather at the time of the accident was reported to be 82˚F with a westerly wind of 20 mph, with clear skies, and good visibility.

Investigators have examined the train braking systems, signals, and track geometry. Thus far, no anomalies have been noted.

The NTSB has possession of the Amtrak engineer’s cell phone and has obtained the cell phone records. NTSB forensic experts are examining the phone and phone records. Although the records appear to indicate that calls were made, text messages sent, and data used on the day of the accident, investigators have not yet made a determination if there was any phone activity during the time the train was being operated. Investigators are in the process of correlating the time stamps in the engineer’s cell phone records with multiple data sources including the locomotive event recorder, the locomotive outward facing video, recorded radio communications, and surveillance video.