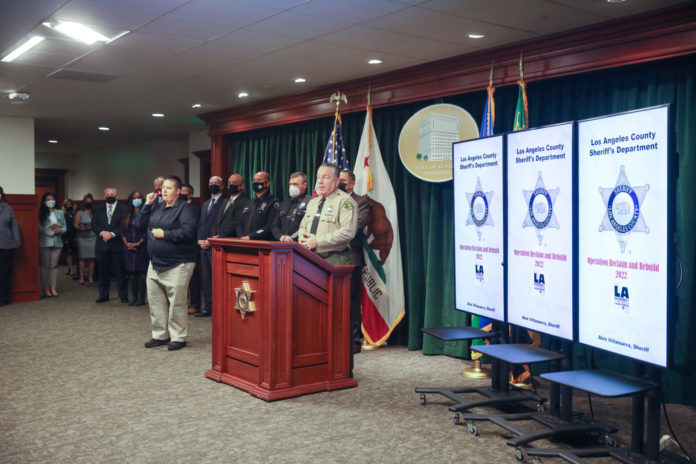 LOS ANGELES – (LA SHERIFF) – During a press conference on Tuesday, February 15, 2022 at the Hall of Justice in downtown Los Angeles, Sheriff Alex Villanueva announced details and results from the seventh annual Operation Reclaim and Rebuild enforcement operation, conducted by the Los Angeles Regional Human Trafficking Task Force and more than 80 participating federal, state, and local law enforcement agencies, and task forces from across California. The week-long, statewide effort aimed at combatting human trafficking took place between Sunday, February 6, and Saturday, February 12, 2022, and was conducted in various mediums and met with positive results.

Operation Reclaim and Rebuild focused on rescuing victims of sexual slavery and human trafficking, providing victims with much-needed services, identifying and arresting their captors, seeking successful prosecutions, and disrupting the demand for vulnerable victims by targeting their customers. Police agencies and other trafficking task forces throughout our state joined in the enforcement operation to send the clear message that California law enforcement shares a unified mandate: Human trafficking must not be tolerated in our state!

In preparation for the event, an operational planning meeting took place in Los Angeles, with over 200 federal, state and municipal law enforcement detectives from all over California in attendance. Investigators focused enforcement operations wherever the trafficking of human beings took place, from confronting the reality of sidewalk prostitution by conducting demand operations, to challenging the virtual reality of the cyber world where traffickers believe they can operate anonymously using the internet.

The internet furnishes a vast variety of opportunities for traffickers, but with the experience of specially-trained cyber detectives who posed as vulnerable teenagers and interacted with suspects on social media, traffickers and customers who were anxious to exploit found their plans foiled.

Victims encountered during enforcement efforts were cared for by personnel from various Department of Children and Family Services Agencies and victim service providers in each county. In Los Angeles County, South Los Angeles Anti-Trafficking Committee, comprised of Saving Innocence, Zoe International, Journey Out and many other local service providers coordinated the emergency services response for victim care and collaborated with similar, non-governmental victim service organizations throughout the state.

Operation Reclaim and Rebuild was widely successful in its endeavor with 65 adult and 7 minor victims being recovered; 182 males arrested for the charge of Solicitation; and 30 suspected traffickers and exploiters were arrested. In total, 413 arrests were made.

Sheriff Villanueva relayed the mission, efforts and results of Operation Reclaim and Rebuild, he gave a firm direction to the Victims, he reiterated, “The Los Angeles County Sheriff’s Department and our partners stand with each victim of this heinous crime. You are the focus of this endeavor. We are here for you. We are here to help you reclaim your freedom from the binds of sex trafficking, and to provide you the support and tools to rebuildyour lives.”

To the traffickers and solicitors: “We will not tolerate the enslavement and trafficking of others in any form. We will seek you out and prosecute you to the fullest extent of the law.

To the Johns: “Purchasing commercial sex is illegal and buying sex adds to the exploitation of those involved.”

The Los Angeles Regional Human Trafficking Task Force, which oversaw the coordinated effort, defined the undertaking, “Operation Reclaim and Rebuild is a state-wide operation which displays the mutual commitment of California law enforcement, social service agencies, and victim service providers in the fight to end sex trafficking. The L.A. Regional Human Trafficking Task Force is an example of how individual entities can be far more effective, when they join together in a shared mission. Today, 7 children have been rescued from their exploiters and 65 women have been connected with the services necessary to rebuild their lives, free from exploitation.”

The Executive Director, Alan Smyth from “Saving Innocence” challenged the media by stating “Human Trafficking happens all year long, every day. The big sporting event just left town but you know what? We haven’t left town and we are going to be here every single day in combating this incredible, brutal crime that has been perpetrated on our most vulnerable. So the biggest mistake we can make would be turning off our cameras and not writing anymore articles because somehow we think human trafficking is gone because the Super Bowl is not here anymore. I want to stand before you and tell you, it has not gone away.”

“From top to bottom, California is committed to the fight against human trafficking,” said California Attorney General Rob Bonta. “We’re working all across the state to hold accountable those who use force, fraud, or coercion to exploit people for labor or sex, and provide services to those they victimize. Our teams — whether in San Diego, Fresno, or Sacramento — are on the ground day-in and day-out to secure justice, and protect and help heal those who are abused and exploited. We’re proud to continue to support our partners through Operation Reclaim and Rebuild. Together, we’re helping build safer communities for all.”