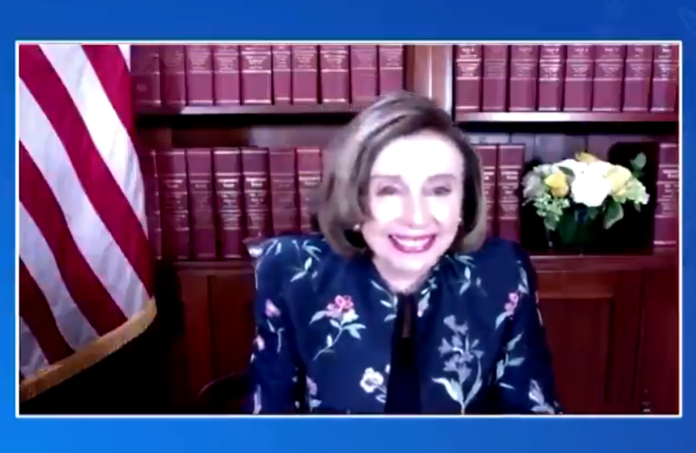 During the Speaker’s remarks, after being introduced by Congresswoman Angie Craig of Minnesota, she told a strange story about her grandchildren and Joe Biden.

Pelosi remarked that her 4 and 5-year-old grandsons were “longtime friends of Joe Biden” and that they “love him.”

Pelosi said she was taking the children to see Biden at the Democratic Congressional Campaign Committee in 2013 and “they were so excited to see him because they’d heard so much about him from their cousins.”

She also described how the children have a ‘magic word’ and it is “open Biden.”

My husband, Paul always says, ‘I just wonder how long into a speech it will be before Nancy starts talking about her grandchildren.’ Our grandchildren, my grandchildren, have for many, many years, been longtime friends of Joe Biden. They have a range in age, but all of them love Joe Biden. But let me tell you one story,

I think was like 2013, four and five year old, two of mine, Paul and Thomas. We were at an event, the DCCC in New York, and Joe Biden was the keynote speaker. They were so excited to see him because they’d heard so much about him from their cousins. And they met him they talked about pets and things like that. And afterward, after the luncheon was over, I took them got candy. Don’t tell their mom. I took them for candy at a place, Dylan’s in New York, where they have sort of like swinging doors. You have to get through the doors from one part of the store to the next. So, here they are, the place is packed and jammed. Kids are making all this noise over there on the side. And all of a sudden, I hear them pronounce, ‘In order to open these doors, we do not say open sesame, we say “Open Biden.” That’s our magic word.’

Open Biden? I love it.

Now more than ever, we need a battle-tested, forward-looking leader who will fight For The People, a President with the values, experience and the strategic thinking to bring our nation together and to build a better, fairer world for our children. As President, he is taking us to new heights of inclusion in the success of America. President Biden is a leader who is the personification of hope and courage, values, authenticity and integrity. Joe Biden is President – as President and with Democratic Majorities in the House and Senate, we will deliver bold progress For The People.

And now it is my privilege to present the [46th] President of the United States, as my children – grandchildren would say, ‘Open Biden,’ Mr. President.