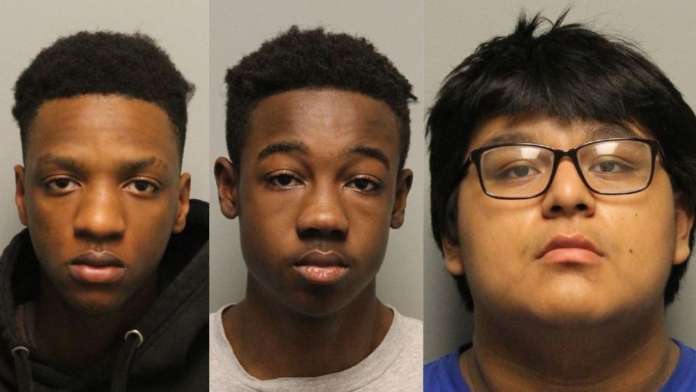 Also charged this afternoon with criminal homicide and aggravated robbery in this case are Abraham Mapangala, 16, and Jesus Sanchez, 15, who accompanied Justice.

The investigation shows that Justice, Mapangala and Sanchez went to Foxworth’s home in a stolen Ford Fusion, jumped Foxworth in the front yard, assaulted him and robbed him of his cell phone. Just as this was happening, Foxworth’s father arrived home and yelled at the assailants. They ran to the rear of the home. Foxworth told his father what had taken place. The father drove down the street to Apple Blossom Court, where the Fusion was parked. Justice, Mapangala and Sanchez ran to the car and got in. The father came out of his vehicle and attempted to stop the assailants from fleeing. Foxworth then ran up to help his father. As they were standing at the driver’s door attempting to reach in through the window to retrieve the stolen cell phone, Justice accelerated at a high rate of speed. The father was knocked to the ground. Foxworth was dragged a short distance before he separated from the car and was apparently run over.

The Ford Fusion being driven by Justice was stolen Wednesday morning from the Kroger gas pumps at 6990 Nolensville Pike. The driver of the car pulled up to the pumps and got out to prepay for his fuel when he suddenly heard tires screeching and saw the Fusion being driven away. The Fusion was recovered this morning from the parking lot of British Woods Apartments on Murfreesboro Pike, where Justice lives.

Justice is known to the MNPD. He was arrested and charged with aggravated robbery on December 3, 2019, in a case involving the robbery of a fellow Antioch High School student on the baseball field. The student reported that a gun was pulled. When Justice was apprehended in the school a short time later, he was carrying a BB pistol in his waistband.