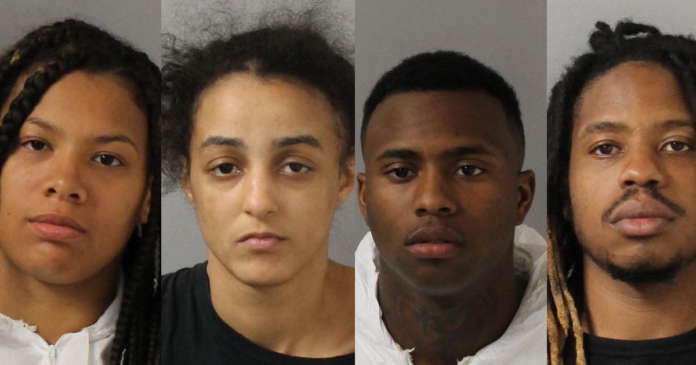 NASHVILLE — After more than 14 hours of investigation, North Precinct detectives are swearing out arrest warrants against five people for the murder of 18-year-old Maplewood High School student Rashawn Wallace inside his father’s residence at 4946 Buena Vista Pike.

Keimichael Clack, 19, Logan Sadler, 26, Ajah Miles, 22, Chaziah Woods, 19, and Ronnie Sims Jr., 28, are accused of being part of a plot to rob Wallace’s father, Roger Wallace, 44. The warrants charge all five with criminal homicide. Clack, Sadler and Miles are in custody. Woods was wounded in the shoulder during the gunfire and will be arrested upon his discharge from Skyline Medical Center. Sims is at large.

Police say the two female suspects in this case, Sadler and Miles, were inside the residence visiting Rashawn and Roger Wallace. At approximately 2:30 a.m., Miles went out the front door, which allowed other persons to enter, including Clack, Woods and Sims. Shots were fired inside the residence. Rashawn Wallace was hit multiple times and died at the scene. His father was wounded in the leg and was transported to Vanderbilt University Medical Center for treatment.

Officers responded quickly to the 2:35 a.m. shooting call. They detained Clack and Sadler at/near the scene. Miles drove the wounded Woods to the hospital.

Work on this case continues by North Precinct Detectives Stanley Truitt, Waylon Proffitt and Lindsay Smith. The suspects are also under investigation for other criminal activity in the Middle Tennessee/Southern Kentucky region.

Anyone seeing Ronnie Sims Jr. or knowing his whereabouts is asked to immediately contact Crime Stoppers at 615-742-7463. Callers to Crime Stoppers can remain anonymous and qualify for a cash reward.