On Sunday, October, 11, 2020 at about 7:45p.m., a group gathered near Southwest Naito Parkway and West Burnside Street. A published advertisement for the event indicated it was a direct action where cameras, journalists, and live streamers were specifically excluded. This indicated that those attending were planning to engage in criminal behavior and were attempting to prevent the collection of video evidence that could be used to hold them accountable. Many in the group were wearing all black, masks, body armor, helmets, and were carrying shields. At its peak the crowd numbered close to 300 people.

The group marched on West Burnside Street and Southwest Broadway, blocking all vehicular traffic. They stopped in the South Park Blocks, Southwest Park Avenue between Southwest Madison and Southwest Jefferson Streets. Individuals put chains and straps around the Theodore Roosevelt, Rough Rider equestrian statue. People pulled on it for several minutes. Then a vehicle was attached to it and used to topple the statue. The park was also marred with graffiti. According to Portland Parks and Recreation, that statue has stood there since 1922.

The crowd turned its attention to the Abraham Lincoln statue in the Park Blocks between Southwest Madison and Main Streets. The 1928 statue was also pulled to the ground. After that, people in the crowd began breaking windows at the Oregon Historical Society building, 1200 Southwest Park Avenue. At least three lit flares were thrown into the structure in an apparent attempt to start fires. The flares went out before causing significant damage.

About the same time as the efforts to topple statues was occurring, Central Precinct Officers responded to a call of a subject in the 2500 block of Southeast Clinton Street shooting a firearm in the neighborhood. Multiple callers reported this alarming and dangerous behavior to dispatch. Upon arrival, police located the suspect who fled in the area of Powell Park. Additional resources were requested to assist, but most of the resources were busy with the escalating events downtown. Two officers arrived in the park and contacted the suspect who was not cooperative. The suspect was on his knees at one point, but not following orders, then got up and fled again. Officers were able to locate the suspect and take him into custody after he ran to a residence and went onto the front porch. Officers recovered a revolver and fortunately there were no reports of injured persons.

Due to the ongoing tumultuous and violent conduct, the incident met the legal definition of a riot. The crowd was advised that it was a riot over loudspeaker and via PPB’s Twitter feed: “This has been declared a RIOT. All persons must immediately disperse to the NORTH. Failure to adhere to this order may subject you to arrest, citation, or crowd control agents, including, but not limited to tear gas and impact weapons.”

Portland Police is adhering to a prohibition on use of CS gas, but a warning using the general term “tear gas” is required by state law. 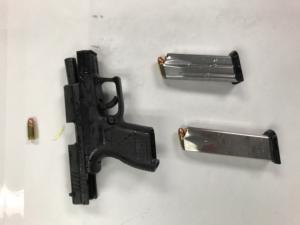 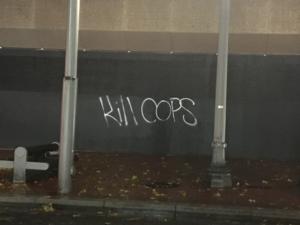 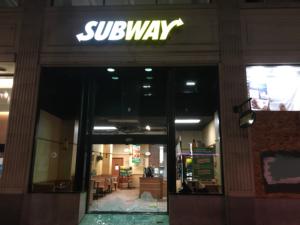 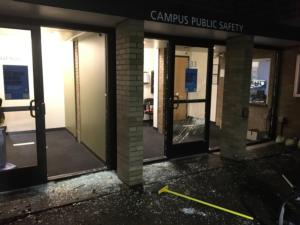 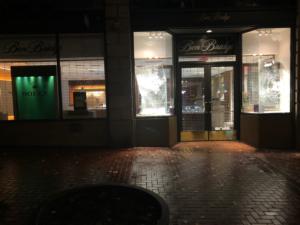 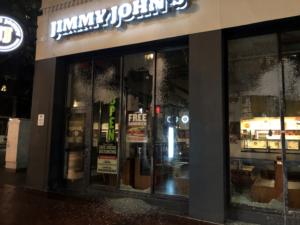 Despite the warnings, the crowd continued committing acts of destruction. They broke windows and applied graffiti on businesses as they went, including a jewelry store, restaurants, coffee shop, bank, phone store and more. A restaurant in the 1400 block of Southwest Park Avenue had at least two bullets fired through the front windows, which lodged in the back wall.

Officers moved in and dispersed the crowd. They made targeted arrests, including one for breaking numerous windows. He was also armed with a loaded pistol. The driver of a vehicle used to pull over the statue was also arrested, as was a person involved in an assault. More arrests and charges are possible. Officers also seized rocks and a hammer.

The following were booked in the Multnomah County Detention Center on the listed charges:

Justin Bowen, 25, of Portland — Assault in the Fourth Degree (2 counts), Unlawful Use of Pepper Spray