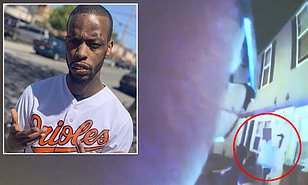 MARYLAND — The Baltimore County Police Department is releasing the body-worn camera (BWC) video, redacted 911 call audio, and radio transmissions from the May 16 officer-involved shooting death of Robert Johnson Jr in the unit block of Skipjack Court.

The department reviewed the video with the family and attorneys for Johnson, as well as several community stakeholders.

Officer Knight has been cleared of any criminal charges by the Baltimore County State’s Attorney’s Office. As with similar cases, the administrative investigation is ongoing.

“Black lives matter. Blue lives matter. All lives matter. When Mr. Johnson reached for that handgun, he immediately put Officer Knight’s life at risk,” said deputy state’s attorney Robin Coffin. “When he continued to hold onto to that handgun and run with it, and run with it in that community, that was very busy out there with 30 or more people outside, doors were open and he was running towards that area that was blocked off — holding onto that gun — he presented a grave risk to that community.”

Baltimore Co prosecutor while talking about the decision not to prosecute an officer for a deadly police-involved shooting in Essex last month: “Black lives matter. Blue lives matter. All lives matter.” @wjz pic.twitter.com/4iCCj18aim