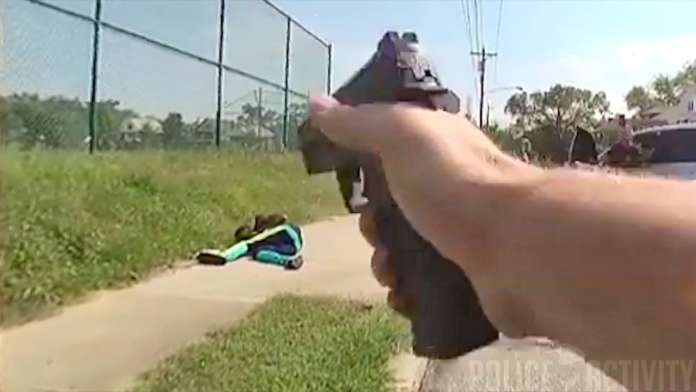 CINCINNATI — (Scroll Down For Video) — Hamilton County Prosecutor Joseph T. Deters announced that no charges would be filed against the officer in the September 11th officer-involved shooting in Avondale. A plainclothes Cincinnati Police Officer was working undercover in Avondale in an unmarked vehicle at approximately 12:15 p.m. when he saw a man, now known as Vernell S. Jackson (DOB 03/06/1999), pull a gun out of his pocket and move it to his waistband. The undercover officer radioed for a uniformed officer to assist. Cincinnati Police Officer Marc Schildmeyer responded in uniform in a marked police cruiser. Both the undercover officer and Officer Schildmeyer pulled up near Jackson in the area of Blair Court and Ridgeway Avenue. Officer Schildmeyer exited his cruiser and ordered Jackson three times to show his hands.

Jackson was standing sideways to the officer with his right side towards the officer. Jackson had a loaded gun in his left waistband. Rather than show his hands as ordered, Jackson pulled a gun from his left waistband and raised it as he turned towards Officer Schildmeyer. Officer Schildmeyer fired once, striking Jackson in the chest. Officer Schildmeyer immediately began lifesaving measures on Jackson until paramedics arrived. Jackson was transported to University of Cincinnati Medical Center where he underwent surgery and, at last check, remains in critical but stable condition. Jackson’s loaded Hi-Point .380 semiautomatic handgun was recovered at the scene. Jackson now faces Carrying a Concealed Weapon (F4) and Aggravated Menacing (M1) charges.

Hamilton County Prosecutor Joseph T. Deters commented, “We have another Cincinnati Police Officer to be commended for the manner in which he handled a dangerous situation. Jackson, armed with a loaded gun, was ready to shoot. Because of Officer Schildmeyer’s quick response and training, we are here today not talking about an officer shot in the line of duty or the shooting of innocent bystanders. Officer Schildmeyer’s cruiser and body-worn camera footage shows Jackson raising his gun towards the officer. Officer Schildmeyer was 100% justified in shooting Jackson. He likely saved his own life as well as the lives of others. As I said before, he is to be commended.” Prosecutor Deters also expresses his appreciation to Cincinnati Police Chief Eliot K. Isaac and his staff for their cooperation in this investigation and assistance in the matter.