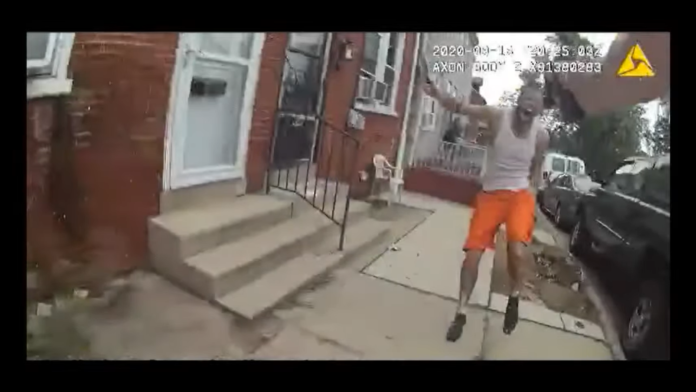 On Sunday afternoon, officers from Lancaster Bureau of Police responded to a residence on the 300 blk. Laurel St. for a report of an in-progress domestic disturbance. Officers arrived on-scene a few moments later.

On scene, a Lancaster city police officer fired at a 27-year-old man who was armed with a knife. The man, identified as Ricardo Munoz, was killed and pronounced dead at the scene.

Protesters swarmed the scene and claimed the man was autistic–this was not confirmed. The demonstrators were also upset that Munoz’s body was left on the ground for a period of time.

Bodycam footage shows that when the officer gets in front of a residence in the 300 block of Laurel Street, Munoz immediately emerges from inside and runs toward the officer, brandishing a knife above his head, in clear view, in a threatening manner. The officer then fired. No one else was struck by gunfire.

The Lancaster County District Attorney’s Office is investigating the shooting.

Police shot and killed a reportedly autistic man in Southwest Lancaster City today and left his body on the ground for hours. We’re here at the police station demanding justice. Police are escalating the situation. pic.twitter.com/x70X3SJWui

Rain in downtown Lancaster has dispersed some but majority of protestors are not deterred https://t.co/nIokPxELyP

“A police-involved shooting has significant impact on a community, as we are seeing with the large number of individuals gathering in the streets,” District Attorney Heather Adams said Sunday night. “However, I am asking that all reaction be tempered as the investigation is ongoing.”

“We will do our best to release details about the incident in a timely manner,” DA Adams said.