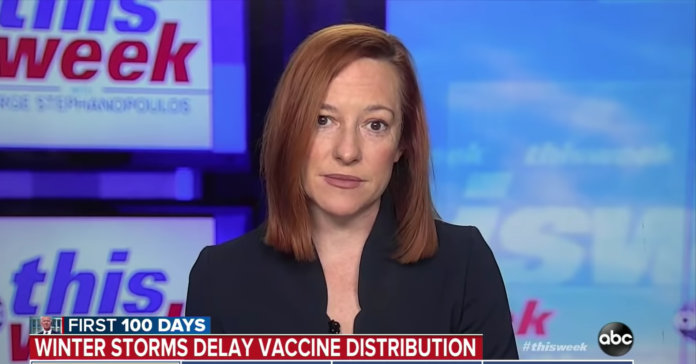 When do you expect that we will see President Biden in Texas? Where will he go?

JEN PSAKI, WHITE HOUSE PRESS SECRETARY: Well, I traveled with the president to Michigan on Friday to go tour a Pfizer plant and I can tell you that he was getting updates from his acting FEMA administrator, he was closely watching the news, talking to his team, and he is eager to go down to Texas and show his support. But he is also very mindful of the fact that it’s not a light footprint for a president to travel to a disaster area. He does not want to take away resources or attention. And we’re going to do that at an appropriate time in coordination with people on the ground. Could be as soon as this week.

KARL: And let me ask you about those 6 million doses that have been delayed because of the weather, do you have any update? What’s the plan for getting them out? Have you already been able to distribute some of them?

PSAKI: We have and we knew we can’t control mother nature, no one can, but we can certainly contingency plan. And what our team has been doing and preparing to do is engage with and work with the Postal Service, work with FedEx and others to get those doses out to vaccination centers, to communities as quickly as they can handle them. Because, of course, they need to be at level of refrigeration, so we’ve been able to get 2 million of those 6 million doses out. We expect to rapidly catch up this week, fill that backlog, make sure they’re out to communities and also meet our deadlines and our timelines of the doses that are due to go out this upcoming week.

Now what happens here is the governor requested a federal disaster declaration. The president asked his team to expedite that. And FEMA determined where the counties should be — where it should focus the immediate resources, where the counties that are hardest hit so that they can make sure they get to the people in most need.

KARL: Well, it certainly looks like this is a disaster that affected the entire state.

PSAKI: That’s our goal, that’s our objective, that’s our plan, Jon. And — but what we need and what the president said at the time we need is funding. That’s why he’s proposed $130 billion in the American Rescue Plan because many schools across the country don’t have the resources to be able to invest in improving facilities, on hiring more bus drivers, on hiring more temporary teachers so we can have smaller class sizes.

There have been some important steps in the last week, including the CDC guidelines that give clear science-based guidelines for school districts on a range of steps they can take to be safe. But every school in the country does not have that funding and does not have the resources and we need to, from our — from the federal government help address that.

KARL: Does the president support the idea of making that funding in the America Rescue Plan contingent on schools reopening? So a requirement, you receive funding, you bring students back.

PSAKI: That’s not a contingency that we’re putting in — that we’re recommending to go in the bill or in legislation, Jon. I think what he believes is that school districts working with our secretary of education, who we certainly hope will be confirmed this week, need to make a determination about what works best for them based on these CDC guidelines.

There are a number of mitigation measures and steps that can be taken. Vaccinating teachers is one of them, but also hiring more bus drivers, hiring more school teachers, having smaller class sizes. And we’re going to work with school districts — our secretary of education, this will be his first priority to do that. But many of them need funding because they don’t have additional funding in their budgets to be able to do that and plan for the school years ahead.

So I know I’ve heard you address this and say flatly that you don’t believe that teachers — all teachers need to be vaccinated to reopen schools, that’s the CDC guidance. It’s unnecessary. Fauci has said it’s impractical.

But why is it that the president and the vice president have — seemed to have such a hard time saying it as clearly as you have?

I want to play you what Vice President Harris had to say on “The Today Show”.

SAVANNAH GUTHRIE, NBC NEWS ANCHOR: Can you reassure teachers who are listening right now that it is safe for them to go back to school even if they are not vaccinated?

KAMALA HARRIS, VICE PRESIDENT OF THE UNITED STATES: Teachers should be a priority.

GUTHRIE: I know there are teachers listening. And the CDC has said they don’t have to be vaccinated to go back to school. Of course, it’s a priority.

KARL: I mean, why can’t she say what you said? That you don’t believe that teachers — all teachers need to be vaccinated for schools to reopen?

JEN PSAKI, WHITE HOUSE PRESS SECRETARY: Well, Jon, look, the vice president and the president and the federal government, we all believe that teachers should be prioritized. I mean, about half of the states in the country also have prioritized teachers and they’ve put them in the priority — or the priority category of frontline healthcare workers because of the role that they play. But it doesn’t need to be a prerequisite. And that’s what the CDC is saying.

The CDC is saying, in order to be safe, there are a number of steps that can be taken. Vaccinating teachers is one of them, but having smaller class sizes, having kids more separated on buses, more PPE, more testing, facilities upgrades, those are additional steps that can be taken. And our secretary of education will work with school districts to implement that.

So they should be prioritized, but our science, experts are saying it’s not a prerequisite, and that’s the guidelines that we follow.

KARL: So, a number of states, including New Hampshire and Iowa have mandated local school districts reopen in the coming weeks. Other states, including the Democratic governors, Minnesota and Virginia, have — have urged this strongly.

Is the White House okay with that? Is the president okay with governor mandating school districts reopen schools, in-person learning in the coming weeks?

PSAKI: The president is married to a teacher. He knows how vital it is for students to be in classrooms.

The role we’re playing from the federal level is to support the CDC guidelines, science-based guidelines that are giving school districts the road map they need to reopen.

KARL: Okay, I want to turn to another controversy that raged this week. Andrew Cuomo under fire for allegedly not being transparent and misleading on his — on the number of nursing home deaths in New York.

Last spring, President Biden cited Andrew Cuomo as the gold standard for leadership during the pandemic.

JOSEPH R. BIDEN, PRESIDENT OF THE UNITED STATES: Your governor of New York has done one hell of a job. I think he’s sort of the gold standard.

So, does President Biden still consider Andrew Cuomo the gold standard when it comes to leadership on the pandemic?

PSAKI: Well, Jon, we work with Governor Cuomo, just like we work with governors across the country. He’s also chair of the NGA.

So, he plays an important role in insuring that we’re coordinating closely and getting assistance out to people of his state and to states across the country. And we’ll continue to do that.

And there are, of course, will be a process. There are investigations. We’ll leave that to others to determine — the appropriate law enforcement authorities to determine how that path is going to move as we look forward.

And I’m not here to give new labels or names from the president. I’m here to communicate with you about what our focuses are and what his objectives are as president.

KARL: All right, White House Press Secretary Jen Psaki, thank you for joining us here on “This Week.” I hope it will be a first of many appearances.