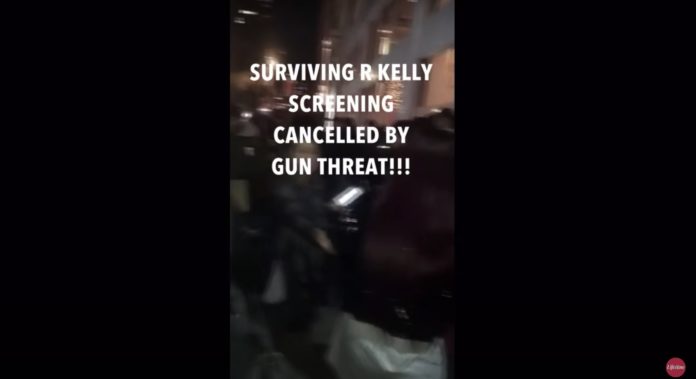 Donnell Russell, manager of music recording artist Robert Sylvester Kelly, better known as “R. Kelly,” was charged in two counts with threatening physical harm by interstate communication, and conspiracy to do the same, for placing a threatening phone call to a theater in Manhattan to prevent the December 4, 2018, screening of a docuseries exploring allegations of R. Kelly’s sexual abuse of minor girls and adult women.

Acting U.S. Attorney Audrey Strauss said: “As alleged, Donnell Russell used threats of violence to stop a screening of a docuseries devoted to exploring allegations of sexual abuse against women and minor girls by the recording artist R. Kelly. By allegedly threatening a shooting at the theater, Russell prevented the screening, which was attended by a number of R. Kelly’s alleged victims. Threats of gun violence aimed at intimidating and silencing victims of sexual abuse are unlawful as well as unacceptable. We are committed to aggressively investigating and prosecuting such crimes.”

FBI Assistant Director William F. Sweeney Jr. said: “It defies logic that a threat like the one alleged here could stop victims from speaking about their alleged abuse. The violence Mr. Russell allegedly threatened succeeded in shutting down one airing of the documentary, but he was unable to silence the women featured in the film. Each and every day, we do everything in our power to make sure victims of sexual abuse have the opportunity to be heard, and will continue to do so regardless of those who allegedly use violence as a means to stop them.”

According to the allegations contained in the Complaint unsealed today in Manhattan federal court and publicly available documents:

Russell, then-manager for R. Kelly, participated in a coordinated effort, including through the use of threats of violence, to prevent the screening in December 2018 of a multi-part documentary or “docuseries” entitled “Surviving R. Kelly” at NeueHouse, a theater in New York, New York (the “Screening”). The docuseries explores allegations that R. Kelly engaged in abusive sexual relationships with minor girls and adult women.

Throughout the day of the Screening, Russell, who was located in Chicago, Illinois, worked with, among others, another individual associated with R. Kelly (“CC-1”) who was in New York the day of the Screening, to draft correspondence to an executive at the Lifetime television channel discouraging the executive from airing the docuseries. Additionally, RUSSELL admitted that he sent NeueHouse a “cease and desist” letter to stop the Screening from going forward. When that failed to stop the Screening, Russell attempted to contact various law enforcement agencies in and around the theater, seemingly in a further effort to disrupt the Screening. Russell contacted a NeueHouse employee directly, via a landline associated with Russell’s home address in Chicago, to threaten that there was a person in the theater with a gun prepared to shoot up the Screening (the “Threat Call”). After receiving the Threat Call, the NeueHouse employee called 911. NeueHouse cancelled the Screening and evacuated the theater.

Russell, 45, of Chicago, Illinois, is charged with one count of conspiracy to threaten physical harm by interstate communication and one count of threatening physical harm by interstate communication, each of which carries a maximum penalty of five years in prison. The statutory maximum penalties are prescribed by Congress and are provided here for informational purposes only, as any sentencing of the defendant would be determined by the judge.