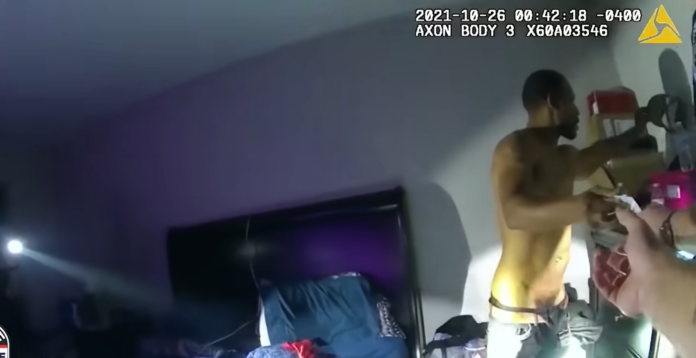 Louisville, Kentucky — (Scroll Down For Video) – On Tuesday, October 26, 2021. At 12:35 a.m, 0fficers from Louisville Metro Police Department’s 5th division, responded to a domestic violence complaint, on the 2500 block of River Bend Drive, where a firearm was reported to be inside of a residence. While investigating the complaint, officers spoke to 37-year-old Ivan Foster who was being asked to leave the residence by the homeowner.

Officers followed him into a bedroom to gather his personal items, at which time Foster became increasingly agitated. Officers began giving repeated verbal commands to Foster, to stop reaching into a stack of clothes and to sit on the bed. Based on the body cam footage captured by officer Timothy Lanham, Foster proceeded to retrieve a firearm, that had been concealed in a pile of clothes, on top of a dresser and fired a weapon striking the police radio Seabolt was wearing on his hip.

EMS responded to the residence and pronounced Foster deceased at the scene.