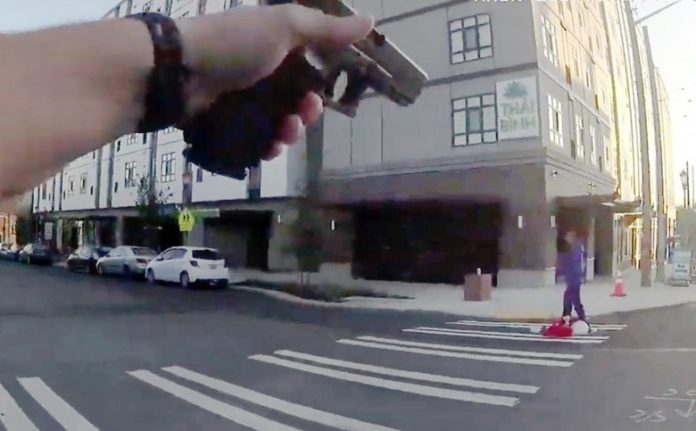 The Seattle Police Department has released 911 audio, body-worn video, and photos from the July 3rd officer-involved shooting in the Chinatown-International District neighborhood.

On July 3rd at 8:08 p.m., 911 operators received several calls that the suspect, an adult woman, was seen firing a handgun into the air near 12th Avenue South and South Jackson Street. Witnesses said the woman was wearing purple clothing, and carrying a red blanket and a handgun.

Officers were dispatched and arrived in the area a few minutes later. Officers made contact with the woman at 10th Avenue S and S Jackson Street. At 8:13 p.m., two officers fired their service weapons, striking the woman in the shoulder.

Officers immediately provided emergency medical treatment, including a tourniquet to the woman’s wounded arm, until Seattle Fire medics arrived and transported her to Harborview Medical Center. She remains under hospital care, and her injuries are non-life threatening.

Earlier today, the woman was charged with felony assault, theft of a firearm and a felony weapons violation. Upon discharge from the hospital, she will be booked into King County Jail.