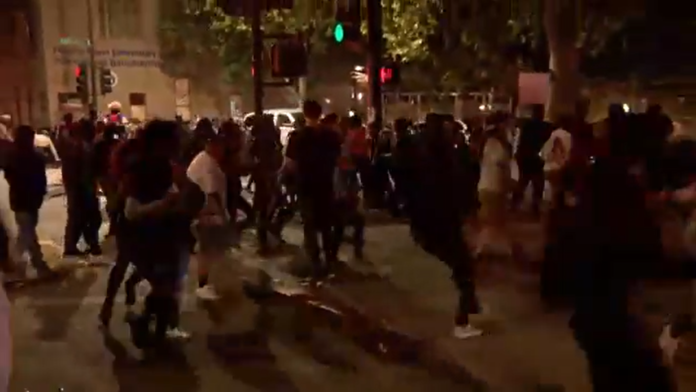 San Jose, Calif. – On Friday, May 29, 2020, at about 9:06 PM, Santa Clara County Sheriff’s deputies responded to an unlawful assembly occurring in downtown San Jose. As one of the deputies stood his post in the skirmish line at 6th Street and Santa Clara Street, he observed the suspect vehicle, a grey Dodge Durango, driving into the intersection at high rate of speed. Several protesters jumped out of the way to avoid being struck by the suspect vehicle. The deputy saw the same vehicle make a U-turn and drive back toward the crowd. At this point, the deputy saw the suspect vehicle reverse at a high rate of speed and run over two adult male victims. The deputy believed the suspect was intentionally attempting to run over the victims. The suspect vehicle then turned toward the protesters and deputies, and drove directly at them. One deputy fired once from his department issued handgun to stop the imminent threat.

My cameraman recorded the SUV that ran over two people tonight in downtown San Jose. He had no idea what he was capturing.

He also got the crowd of protestors running for their lives. You can hear the fear in their voices.

What was mostly a peaceful protest turned tragic. pic.twitter.com/vnqv4A3ZV8

The suspect vehicle fled the scene after the shooting. The victims were transported to a local hospital with non-life-threatening injuries and were later released. No deputies were injured. A San Jose police officer at the scene was able to record the plate of the suspect vehicle. San Jose Police Department homicide detectives conducted follow-up investigation and located the suspect vehicle and suspect Bianca Orozco at a residence in San Jose. The suspect was not injured and subsequently booked into Santa Clara County Jail for attempted murder.

Anyone with information is asked to contact Detective Sergeant Isidro Bagon or Detective Ramon Sanchez of the San Jose Police Department’s Homicide Unit at 408-277-5283.