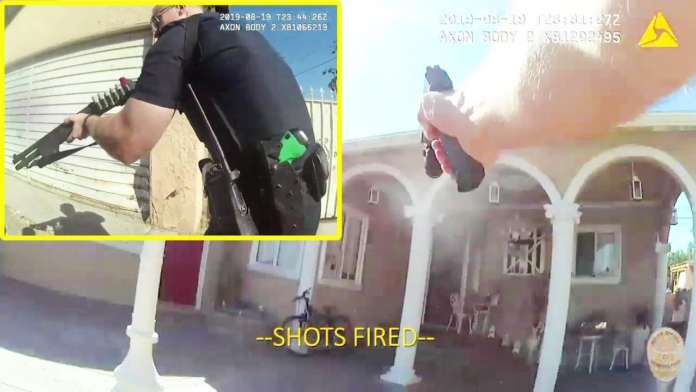 CALIFORNIA — (Scroll Down For Video) — On August 19, 2019, around 4:19 p.m., LAPD, uniformed patrol officers, assigned to Mission Division, received and responded to a “Family Dispute” radio call for service at the 13100 block of Ottoman Street. When the officers arrived at the location they met with the person reporting, who directed them to the suspect (later identified as) Carlos Torres Jr. The officers encountered Torres on the front porch and attempted to speak with him. After several minutes of dialog, he stepped back into the residence as he removed a concealed handgun from his waistband. Torres then pointed the handgun at the officers and fired at them, which precipitated an OIS. Torres retreated into the house and a few moments later he was seen running through a neighborhood yard and onto Ottoman Street. As Torres continued to run west bound on Ottoman Street, a second OIS occurred. Torres then ran through a residential property on Ottoman Street and into the rear east/west alley of that location.

A responding Foothill Division, Gang Enforcement Detail unit, saw Torres in the alley and stopped their patrol unit at the mouth of the alley on Arleta Avenue. Torres again raised his handgun in the direction of the officers, at which time a third OIS occurred. Torres collapsed in the alley and was taken into custody without further incident. The Los Angeles Fire Department paramedics responded to the scene and pronounced Torres deceased. A .22 caliber handgun was located at scene and recovered as evidence. Fortunately, no officers or innocent bystanders were injured during this incident. LAPD’s specialized Force Investigation Division (FID) responded to the scene and began interviewing witnesses and collecting forensic evidence. A representative from the Office of the Inspector General responded and monitored the scene investigation.