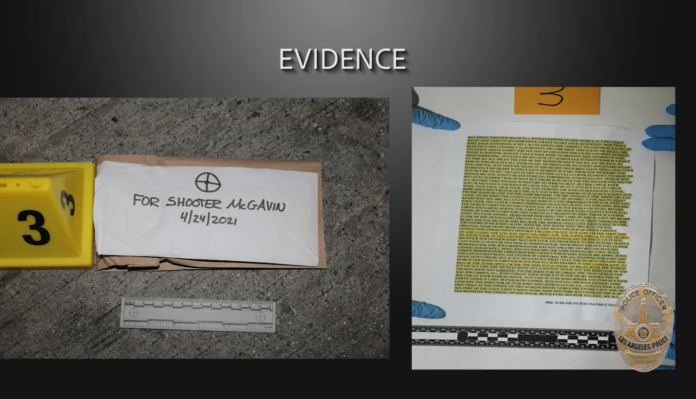 Solitro had a long history of mental illness.

“The officers gave him commands, which he did not follow, and he started counting down saying ‘3, 2, 1.’ He started to pull his right hand from behind his back out to the front. And at that time, there was a police-involved shooting,” said Detective Meghan Aguilar, with the LAPD.

From LAPD: On April 24th, 2021 around 2:35 p.m., LAPD Hollywood Patrol Division officers were westbound on Sunset Boulevard responding to a radio call with the lights and siren of their police vehicle activated. As they approached Fairfax Avenue, they moved into the left turn lane. A 2012 Hyundai Sonata pulled in front of them and stopped. The driver of the vehicle, later identified as 34-year-old Richard Solitro, drove in reverse and struck the front of the police vehicle. Solitro exited his vehicle, wearing body armor and concealing his right hand in the small of his back. After counting to three, Solitro removed his right hand from behind his back and raised it in the direction of the officers, resulting in an OIS.

Solitro was struck by gunfire. The Los Angeles Fire Department responded and determined Solitro deceased at the scene.

There was no weapon found in the vicinity of Solitro.

Los Angeles Police Department’s specialized FID responded to the scene and interviewed witnesses and supervised the collection of evidence by the Forensic Science Division. A representative from the Office of the Inspector General responded and monitored the investigation.