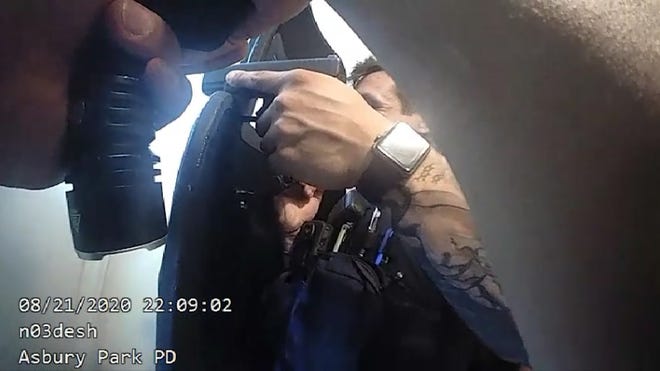 TRENTON, N.J. – (Press Release) — The Attorney General’s Office today released a 911 audio recording and video recordings from officer body-worn cameras and a Taser camera related to the shooting on August 21, 2020 in Asbury Park, N.J., in which a police officer fatally shot Hasani Best, 39, of Asbury Park.

The shooting remains under investigation by the Attorney General’s Office of Public Integrity and Accountability. However, the recordings are being released pursuant to Attorney General Directive 2019-4, the “Independent Prosecutor Directive,” which governs use-of-force investigations in New Jersey and requires that such records, if requested, be released to the public once the initial phase of the investigation is substantially complete.

Today investigators met with relatives of Mr. Best to review the 911 call and the video recordings from the body-worn cameras and Taser camera.

According to the preliminary investigation, multiple officers of the Asbury Park Police Department responded shortly after 9 p.m. on Aug. 21, 2020 to a report of a loud domestic dispute inside a two-family residence in the 900 block of 4th Avenue in Asbury Park. When police arrived, the man and woman involved in the dispute were at the residence.The woman was outside, and the man, later identified as Hasani Best, barricaded himself inside the upstairs apartment.Monmouth County sheriff’s officers arrived to assist the Asbury Park police officers.

Officers tried to negotiate with Mr. Best through the door of the apartment in an effort to end the standoff.During the incident, Mr. Best opened the door at various times, revealing that he was armed with a knife. Mr. Best continued to hold the knife despite repeated requests from the police to drop the knife.Officers attempted to use a Taser, but it was not effective. Mr. Best remained armed with the knife, and at approximately 10:10 p.m., an Asbury Park officer shot and fatally wounded him. Officers and EMS rendered medical aid, and EMS transported Mr. Best to Jersey Shore University Medical Center in Neptune, N.J., where he was pronounced dead at 10:31 p.m.

The audio and video recordings are contained in 12 files, which have been posted online.The full video footage from the two body-worn cameras has been divided into 10 files— five per camera.They are posted in chronological order. Click here for files.

The identity of the officer who fired at Mr. Best was previously released by the Attorney General’s Office.He is Sgt. Sean DeShader of the Asbury Park Police Department.

The investigation is being conducted pursuant to a state law enacted in January 2019 (P.L.2019, c.1), which requires that the Attorney General’s Office conduct investigations of a person’s death that occurs during an encounter with a law enforcement officer acting in the officer’s official capacity or while the decedent is in custody.

The investigation is ongoing and no further information is being released at this time.Under state law and the Independent Prosecutor Directive, when the entire investigation is complete, the case will be presented to a grand jury, typically consisting of 16 to 23 citizens, to make the ultimate decision regarding whether criminal charges will be filed. At present due to the COVID-19 pandemic, regular grand juries are not sitting and hearing cases.