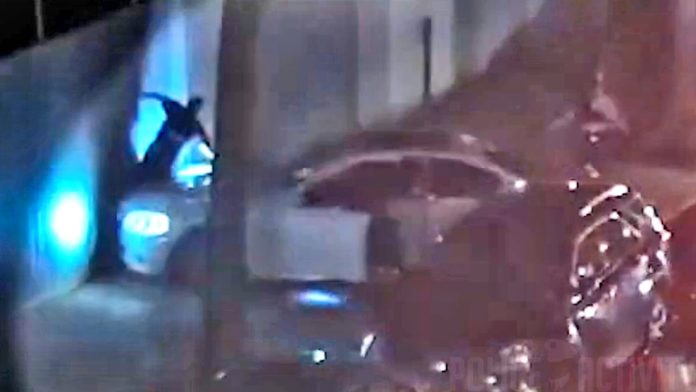 Brooklyn, New York City — The NYPD released body-worn camera footage which shows the moment an officer shot his gun toward a driver who had rammed into him with a stolen car. On Friday, May 24, 2019, Police Officer Keith Stark and Police Officer Brian Mahon were on patrol in the 73rd Precinct in an unmarked police car when they observed an occupied vehicle that was previously reported stolen. The officers approached the vehicle and requested additional officers to the location. Sergeant Robert Deferrari, Police Officer Philip Tantillo, Police Officer Brett Woodard, and Police Officer Shalimar Scribner, all assigned to the Anti-Crime unit in the 73rd Precinct and attired in plainclothes, responded to the location to assist. These actions were captured on CCTV video. After the officers verified the vehicle was stolen, the occupants were instructed to exit the vehicle in order to place them under arrest.

An individual in the front passenger seat complied with the request, and exited the vehicle. 28-year-old Quasar Rollaing failed to comply with the commands and instead drove the vehicle forward while turning the wheel to the right. Rollaing accelerated onto the sidewalk in the direction of Police Officer Stark, striking him and pinning him against a wooden fence. This incident was captured on CCTV video. Police Officer Stark fired three shots from his service firearm at the vehicle, striking Rollaing in the right hand. Rollaing then exited the vehicle and attempted to flee on foot. He was immediately taken into custody without further incident.

Rollaing was transported to Brookdale University Hospital where he was treated for his injuries and subsequently released from the hospital. This incident was captured on CCTV video.