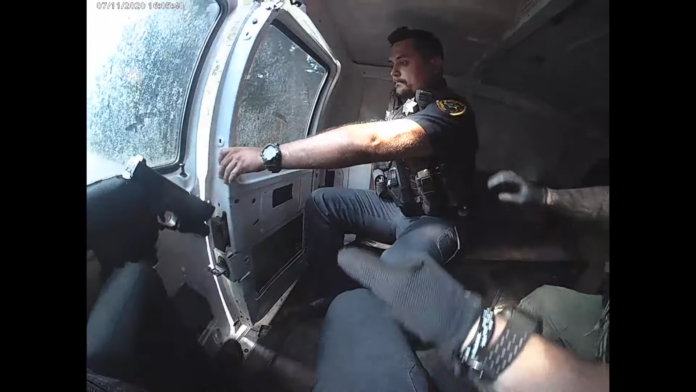 GREENVILLE COUNTY, S.C. — (Scroll Down For Video) — The Greenville County Sheriff’s Office has released bodycam footage of deputies shooting a man dead who was armed with a handgun.

Michael Joseph Culbertson, 26, was wanted on traffic warrants, including resisting arrest, failure to stop for blue lights, interfering with police and reckless driving.

”Deputies observed Culbertson while holding a cellphone in his left hand, retrieve a firearm with his right hand. When he does so, deputies fire on the suspect striking him multiple times,” Tim Brown, Captain of the Greenville County Sheriff’s Office Office of Professional Standards, said.

“Once the suspect is down, deputies place him in handcuffs and begin performing CPR and first aid,” Brown said. “As they approach Culbertson, you can see the suspect’s firearm and the magazine that fell from his possession.”

“At this point in the investigation, it has been determined that five out of seven deputies on scene fired at the suspect. The other two deputies did not fire their weapon,” Brown said.

Culbert’s grandfather, Carey Reese told WIS News, ”It had to be excessive force. Why do you hunt a boy down all day for a traffic violation? There’s some other things that happened before that to make him come out the woods. Some of that stuff needs to come out.”

“He was trying to get out of there and then they shoot him in the back. I mean, they shoot him as his back is turned to ‘em, running away. When’s the stuff ever gonna stop,” Reese said.

“I know it’s a dangerous job out there for the police and I’ve always respected them and I always tried to do that but it’s just… it’s just so upsetting,” Reese said.