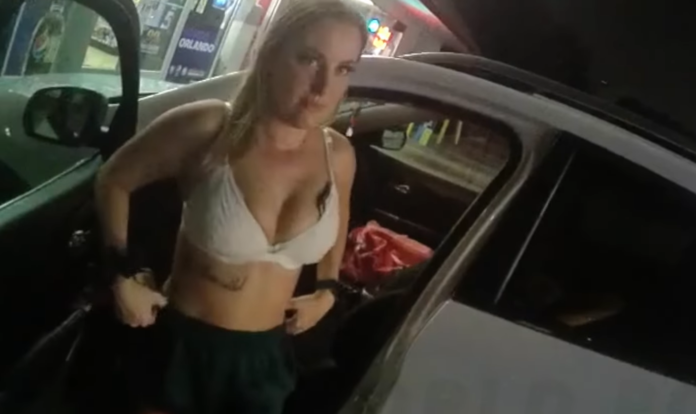 ORLANDO, FLORIDA — From the report of Officer Bruce Stoke, lightly edited for clarity:

On November 9, 2020, at approximately 0330 hours, I responded to a call for service at the Shell gas station located at 3839 South Orange Blossom Trail, Orlando, Florida in reference to reportedly unresponsive subject slumped over behind the wheel of white Jeep utility vehicle who had not responded to multiple attempts at waking her.

Upon my arrival, I located the vehicle parked in a handicapped parking space in front of the gas station’s west-facing front door. I then observed a female subject slumped over in the driver’s seat of the vehicle with her phone in her hands and appearing to be sleeping or unconscious. The subject was initially unresponsive to numerous attempts to wake her by knocking loudly on the driver’s side front window. After knocking hard on the glass numerous times, she appeared to start to come to and then struggled for a noticeable period of time with the simple direction to “open the door.”

The subject finally opened her door and provided me with her driver’s license. Upon her opening the door and speaking with me, I immediately smelled the odor of alcohol emanating from the vehicle. Wanting to ensure that she was not having a medical emergency, I asked her if she needed Orange County Fire Rescue to respond and asked her if she was hurt in any way or required medical attention. She informed me that she did not require medical attention. I also inquired as to why she was parked in a handicapped parking space and learned that she was not handicapped or disabled.

Suspecting the subject to be under the influence of alcohol and possibly narcotics, I inquired as to what drugs she had consumed. She responded that she does not do drugs. I then asked her if she had drank earlier and she informed me that she had and that she works as a bartender. The subject further stated to me that she was “okay” and wanted to go home. I then had her exit the vehicle in order to determine if the odor of alcohol was emanating from somewhere within the vehicle or from her person. As I spoke with the subject outside of the vehicle, I could clearly smell the odor of the impurities of alcohol emanating directly from her person and was able to determine that the odor was emanating from her exhaled breath. I further observed that her eyes appeared bloodshot, watery, and glassy. Her speech was slow and slightly slurred and she stood with an orbital sway, seeming to have difficulty standing in a balanced manner in one position despite the fact that the area where she was standing and walking on was paved, level, and free of obstruction.

Based on the above observations, Orange County Sheriff’s Office Corporal Kyle Gabrus requested that the subject perform voluntary field sobriety tests to which she consented. Corporal Gabrus then explained and conducted the field sobriety tests. Based on the totality of the circumstances, my personal contact with the subject, and her performance on the standardized field sobriety tests, I placed the subject under arrest for driving under the influence. At approximately 3:58​ a.m., she was secured with handcuffs, which were double-locked and checked for the appropriate spacing. She was searched incident to arrest and placed into the backseat of my patrol vehicle. Due to her vehicle being improperly parked in a handicapped parking space, Ace Wrecker was notified and responded to the scene and towed the Jeep to their tow yard.

Corporal Gabrus’ probable cause was transferred to me and I continued with the investigation, transporting the subject to the Orange County Breath Testing Center for further processing. After arriving to the Orange County Breath Testing Center, I smelled a distinct odor of alcoholic beverages emanating from the rear cab area of my patrol vehicle, which was not present in my vehicle prior to her being placed in it. Upon my arrival, I observed the subject during the twenty minute observation period. After the twenty minute observation period, she was taken to Testing Room #2. Once inside the room, I read to her our implied consent warning using a standardized form. She agreed to submit to a breath test, which yielded results of .232% and .222%. I issued a DUI citation and transported the subject to the Orange County Jail.