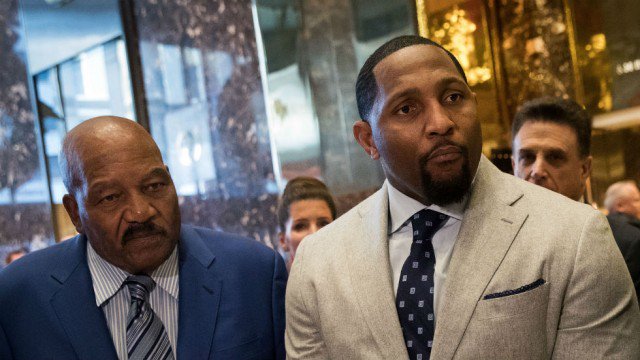 Trump Tower was the scene of NFL royalty Tuesday, as Ray Lewis and Jim Brown met with the president-elect at his New York transition offices. After the meeting, Lewis spoke of addressing urgent economic conditions, saying, “Black or white is irrelevant.”

Trump, who has been criticized for racially insensitive comments and policy positions, also met Tuesday with pop star Kanye West and former “Apprentice” contestant Omarosa Manigault. “I feel it is important to have a direct line of communication with our future president if we truly want change,” West subsequently tweeted.

“Urban development and job creation are everything,” Lewis, a former star linebacker for the Ravens, told reporters after his meeting. “What we believe with the Trump administration is if we can combine these two powers of coming together – forget black or white. Black or white is irrelevant. The bottom line is job creation and economic development in these urban areas to change the whole scheme of what our kids see.”

“I fell in love with him because he really talks about helping African-American, black people and that’s why I’m here,” Brown said on CNN after his meeting. At Trump Tower, he told reporters that he hadn’t voted for Trump, but that “we couldn’t have had a better meeting.”

“The graciousness, the intelligence, the reception we got was fantastic,” Brown said. Brown, a Hall of Famer widely regarded as the greatest running back in NFL history, said he talked to Trump about, among other things, his Amer-I-Can Program, which helps teach life skills to people struggling with poverty.

Lewis said that, because of the program, “we have 30,000 to 40,000 former gang members who’ve changed their lives.” He also said (via the Baltimore Sun) that he thought Ben Carson was a good pick to lead the Department of Housing and Urban Development.

On CNN, Brown praised Trump for surviving a tough presidential campaign and coming out on top. “When he goes through what he went through to become the president, he got my admiration,” Brown told the network. “No one gave him a chance.”