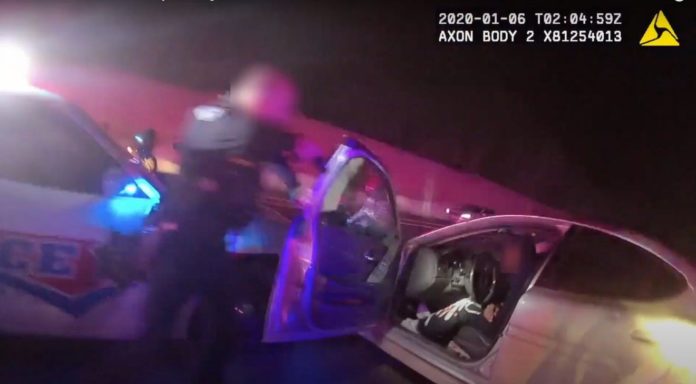 Sparks, NV – (Scroll Down For Video) — The Sparks Police Department has released a critical incident community briefing involving an Officer-Involved Shooting that occurred in January of 2020.

On January 5, 2020, Sparks Police Officers responded to a call in the 1000 block of Rock Boulevard. Officers met with the reporting party who informed officers that her son, identified as Miciah Lee, suffered from mental health issues, threatened to commit “suicide by cop,” and had driven away from the area with a firearm. Officers located a vehicle matching the description provided by the reporting party, and the driver, later identified as Lee, attempted to elude officers. Lee’s vehicle rear-ended another citizen’s vehicle at a stop sign at the intersection of 15th Street and Rock Boulevard. Officers attempted to block Lee’s vehicle and gave Lee verbal commands to exit the vehicle. Lee was able to push a police vehicle and the civilian’s vehicle out of the way by driving forward and in reverse. Lee then left the area at a high rate of speed.

Shortly thereafter, Lee wrecked his vehicle near the intersection of North McCarran Boulevard and Rock Boulevard. Officers partially blocked Lee’s vehicle. A Sparks Police K9 was deployed to remove Lee from the vehicle, and officers approached Lee. As officers were attempting to remove Lee from the vehicle, a struggle ensued, and Lee attempted to access a firearm. Officers fired their service weapons at Lee, striking him. Medical attention was requested, but Lee was pronounced deceased at the scene.

Officers involved in this incident were equipped with body-worn cameras that were activated during this incident. Body-worn video cameras are worn at chest level and capture a general perspective within line of sight from that position. In addition, patrol vehicles are each equipped with a camera installed near the dashboard that captures a perspective from that position. A critical incident community briefing, which includes footage of the incident from body-worn cameras and dashboard cameras, is being released to the public.

“Sparks Police Department is working to improve transparency and ensure the public has access to information that will help the community understand the events of January 5, 2020. Providing this critical incident community briefing is one step toward those goals,” said Acting Sparks Police Chief Chris Crawforth.