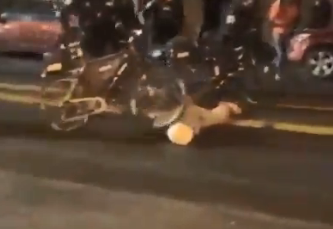 SEATTLE — (SPD) — Police began monitoring a protest that formed in Cal Anderson Park at 7 PM Wednesday night. The group began marching around Capitol Hill and First Hill causing occasional property damage along the way. The group reformed at the intersection of 11 Avenue and Pine Street. Around 10:45 PM a protestor approached the East Precinct and threw an explosive that went through a roll-up gate and exploded near waiting bike officers. A few minutes later additional people cut wires powering the security cameras to the precinct.

Officers identified the individual who threw the explosive and attempted to arrest the person. As a group off bike officers attempted to make the arrest they were then assaulted with bottles and rocks. Police deployed pepper spray and blast balls in an attempt to create space between the officers and the protestors.

The group of protestors again moved through the streets setting dumpsters on fire and throwing explosives at officers.

In total, officers arrested 13 individuals for charges ranging from property destruction, resisting arrest and failure to disperse as well as assault on an officer.

Multiple officers were injured to include one who was struck in the head with a baseball bat cracking his helmet.

In addition to this, the Seattle Police Department is aware of a video circulating on the internet that apparently shows an SPD bike officer’s bike rolling over the head of an individual laying in the street. This matter will be referred to the Office of Police Accountability for further investigation.