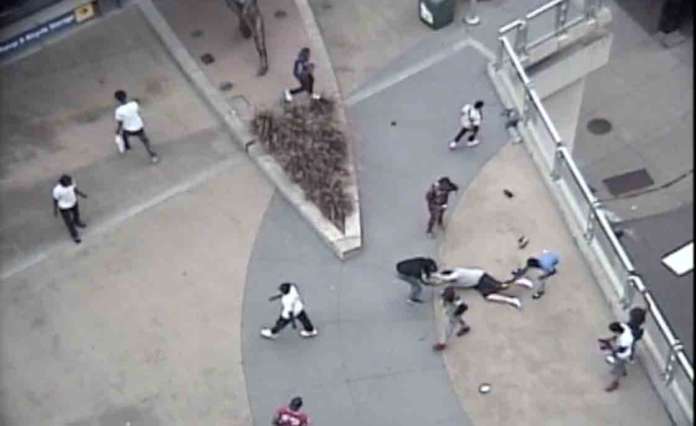 According to criminal complaints and juvenile petitions, the first incident occurred during daylight on the morning of Aug. 3. Minneapolis Police received surveillance video of an attempted robbery outside of Target Field. The video showed about a dozen people trying to take a man’s cell phone and viciously beat him and kick him as they also ripped off his shoes and pants as they went through his pockets.

By the end, the victim was lying on the ground where he was jumped on, hit with planting pots and run over by a bicycle. The victim and the suspects were gone before police arrived.

Over the next three weeks, police worked to identify the assailants and by the last week of August they had questioned, and in many cases, received partial confessions from the defendants, the complaint states.

Earlier this month, police also were able to identify the victim of the assault and robbery and speak to him.

The second incident occurred in the early morning of Aug. 17 near Fifth Street and Hennepin Avenue. According to the complaint, the victim told police we was with friends in a downtown bar but after he left, he was standing on the corner using his phone when a group surrounded him and tried to take his wallet.

The assailants kicked and punched him until he was unconscious and he later was diagnosed with a concussion. Bystanders came to his assistance. The defendants were able to steal his iPhone, his wallet, keys and $100 in cash. He was later notified by his bank that one of the suspects used his debit card to withdraw $220 from an ATM, the complaint states. Again, surveillance footage helped to identify 10 suspects.

In total, four of the suspects in the two robberies were 15 years old and their names and charges are not public. In each of the robberies, a suspect was arrested but not charged.