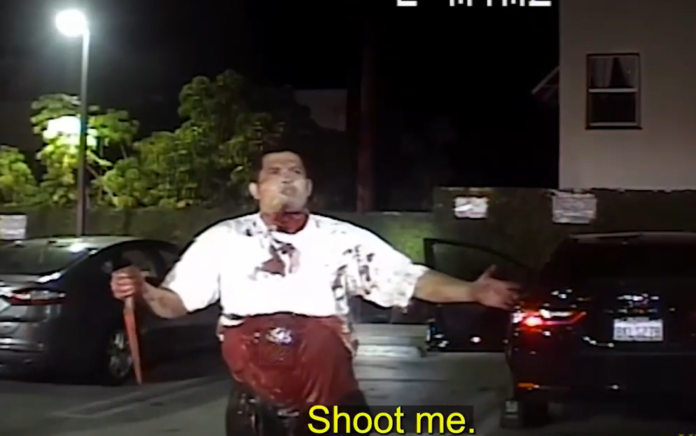 The following is a press release from the LAPD:

On December 26, 2021, around 6:10 p.m., officers responded to a Los Angeles Fire Department backup request for a combative suspect suffering from lacerations and puncture wounds to his neck. The suspect, who at the time of this news release had not been identified, refused to exit a vehicle he was seated in. When LAPD officers arrived at the location, the suspect immediately exited the vehicle armed with a large knife. The officers repeatedly told the suspect to drop the knife. The suspect did not comply with the officer’s commands and, while holding the knife in a raised position, walked in their direction, resulting in an Officer-Involved Shooting. The suspect was struck by gunfire and fell to the ground.

The suspect was transported to a local hospital and was pronounced deceased.

The knife the suspect was armed with was recovered at the scene.

LAPD’s specialized Force Investigation Division responded to the scene and interviewed witnesses, and supervised the collection of evidence by the Forensic Science Division.

The complete investigation will be reviewed by the Chief of Police, the Board of Police Commissioners, and the Office of the Inspector General to determine the thoroughness and accuracy of the investigation and whether the use of deadly force complied with LAPD’s policies and procedures. Additionally, the Los Angeles County District Attorney’s Office who responded to the scene will review the subsequent FID investigation, evidence collected, and witness statements to determine if the force used by the officer was reasonable.