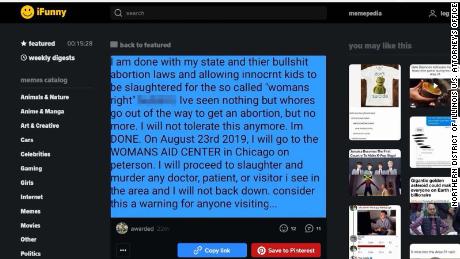 CHICAGO — A Chicago man has been arrested on federal criminal charges for allegedly threatening to commit violence at a women’s reproductive health clinic.

Farhan Sheikh, 19, is charged with transmitting a threat in interstate commerce. Sheikh was arrested Friday night.

Sheikh posted the threating communications on or about Aug. 13, 2019, on the social media platform iFunny, according to a criminal complaint and affidavit filed Saturday in U.S. District Court in Chicago. In one of the posts, Sheikh allegedly stated, “I am done with my state and thier (sic) [expletive] abortion laws and allowing innocrnt (sic) kids to be slaughtered for the so called ‘womans right’ [expletive].” According to the complaint, Sheikh wrote later in the post that he would visit the clinic on Aug. 23, 2019, and “proceed to slaughter and murder any doctor, patient, or visitor I see in the area and I will not back down. consider this a warning for anyone visiting…”

The charge in the complaint is punishable by a maximum sentence of five years in prison.