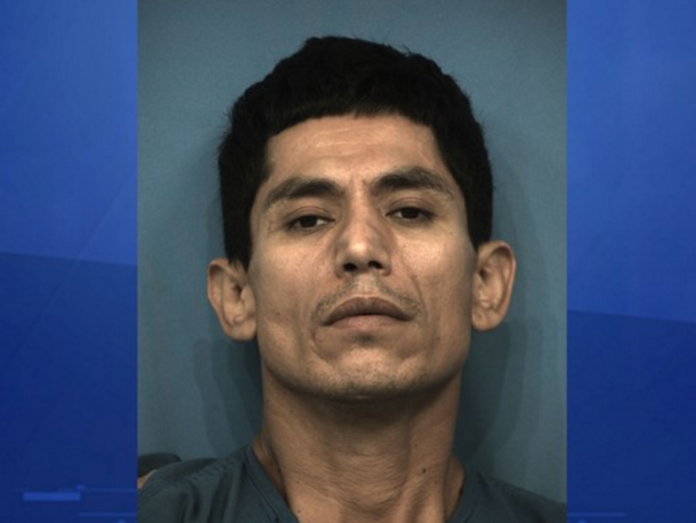 A man suspected of killing two people and kidnapping another during a two-day crime spree through Texas had been deported to Mexico three times since 1996 and was living in the U.S. illegally, authorities said this week.

Juan Navarro Rios, 40, was arrested Tuesday night after he barricaded himself in an apartment complex in an Austin suburb and set fire to part of the building, according to police, who said they grabbed him as he tried to flee down a staircase. He is suspected of shooting and killing two motorists in the Dallas area, and kidnapping a landscape worker in Austin.

Immigration officials said Rios was a Mexican national who had been deported in 1996, 2009 and 2014 for a range of criminal offenses, according to the Associated Press. Police initially identified him as Silvestre Franco-Luviano, but a Dallas County sheriff’s spokesperson later said he used at least eight aliases and that his real name was Juan Navarro Rios.

“This is an example of the worst of the worst that we go after on a daily basis,” Hector Gomez, supervisory deputy marshal of the Lone Star Fugitive Task Force, told the Dallas Morning News.

Crimes committed by people who enter the U.S. illegally, in particular repeat deportees, has become a major political cause among many conservatives and others arguing for tougher border controls and more aggressive action to deport those with criminal records.

The anger reached a peak last year when an undocumented immigrant, a repeat felon who has been deported five times to Mexico, was charged with shooting Kate Steinle while she was walking on a busy pier in San Francisco with her father. The accused man, who claimed his gun fired by accident, is awaiting trial. Republican presidential candidate Donald Trump has championed the issue, accusing the Obama administration of fostering “deadly, non-enforcement policies that allow thousands of criminal aliens to freely roam our streets.”

Later that night, police in Cedar Hill, Texas, a Dallas suburb, responded to reports that someone had fired on cars, injuring one person. Police said Navarro Rios then drove to a Texaco gas station in town, where he fatally shot Welton Betts, 44, and stole his car, forcing the man’s wife out of the vehicle at gunpoint.

Police said Navarro Rios’s next stop was Georgetown Texas, 30 miles east of Austin, where on Monday morning he kidnapped a man doing landscape work outside a Bealls department store, according to KXAN. Authorities found the victim unharmed later in the morning at a gas station a mile away, police said.

According to the Morning News, police received a tip that Navarro Rios was hiding out at his sister’s apartment in Georgetown. On Tuesday, as police evacuated the apartment complex and deployed SWAT teams to the area, Navarro Rios set fire to his sister’s unit and broke through the wall to the unit next door, the Morning News reported. Police arrested him as he fled the burning building.

“The flash bombs went off, you heard them hit the door really hard, you knew they were going in and the screen comes flying out as if he was going to jump out of the third floor, so he had nowhere to go and at that point he had to know that that was it,” one witness told KXAN.

It’s not clear when Navarro Rios first arrived in the U.S., but he was first deported to Mexico in 1996 for what immigration officials said was a felony conviction, according to the AP. Officials wouldn’t say what the conviction was, but court records show that he was convicted of assault and hindering prosecution around that time, the AP reported.

In 2009, Navarro Rios tried to reenter the country through southeastern Texas and was immediately deported for falsely claiming he was a U.S. citizen, ICE officials said.

A short time later, he returned again and was convicted twice of vehicle burglary, once in 2010 and once in 2011, according to court records. He also has convictions in Texas for felony possession of a controlled substance and driving without a license, records show. Authorities located him in an Austin jail in 2011 and charged him with reentry after deportation, the Austin American-Statesman reported. He was deported for the third time in March 2014, after serving an eight-month sentence, officials said.

In his most recent deportation, Navarro Rios likely would have been marked “Priority 1″ by U.S. Immigration and Customs Enforcement, a category reserved for repeat offenders, people convicted of violent crimes, and others deemed to pose a threat to national security.

Immigration rights advocates have criticized the Obama administration for deporting people in record numbers, while praising the White House for using executive orders to keep families and children of undocumented immigrants in the country.

“This is an indictment against the federal government’s failure to police the border and another reason that Texas must continue to focus on border security,” Patrick told the American-Statesman.

The brother of Ruben Junior Moreno, the first victim, said his brother had spent the evening watching a Dallas Cowboys game before he was fatally shot in the driver’s seat of his Hummer on the shoulder of the highway. Carlos Moreno described his brother as funny and outgoing, saying he’d “give you the shirt off his back.”

“For my brother’s life to end in his own truck, it’s not right, just to be sitting there for hours until they found him,” Moreno told the Morning News. “It hurts, it really hurts.”