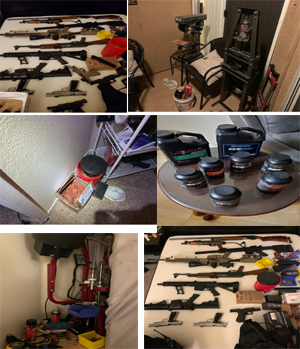 Last Friday, around 7 p.m., investigators served a search warrant in the 1200 Block of North Sycamore Avenue, in the Hollywood area.

Also found, were machines used for manufacturing ghost gun parts and ammunition. In addition, there were several high-capacity rifle drum magazines that were recovered from the location.

30-year-old Dalton Costahaude was arrested and booked for Possession of an assault weapon 30605 PC and additional weapon violations. Costahaude will be arraigned on March 2, 2021, in Superior Court in Van Nuys. His bail has been set at $300,000 dollars.