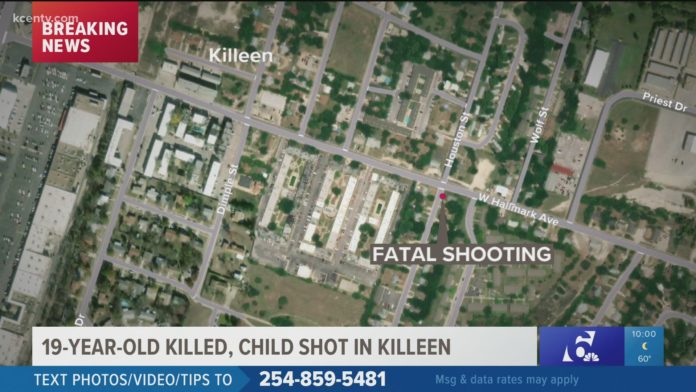 Killeen, TX — At 3:24 p.m. on Saturday officers were called to the 700 block of Houston Street in reference to a 911 call about shots fired. Upon the officers’ arrival, they located two victims suffering from gunshot wounds. Officers started to perform life saving measures until paramedics arrived. The 19-year-old man was transported to the Carl R. Darnall Army Medical Center in critical condition and the juvenile was transported to the McLane Children’s Hospital.

The 19-year-old victim succumbed to his injuries and was pronounced deceased by Justice of the Peace Bill Cooke at approximately 5:55 p.m. He ordered an autopsy to be performed at the Southwest Institute of Forensic Sciences in Dallas. The name of the victim has been withheld pending notification next of kin.

The current condition of the 5-year-old victim is stable with non-life-threatening injuries.

Police believe the incident may have been a drive-by shooting.

The department is asking anyone who may have seen anything or has information about this Murder, to contact Crime Stoppers at 254-526-TIPS (8477) or go online at www.bellcountycrimestoppers.com.