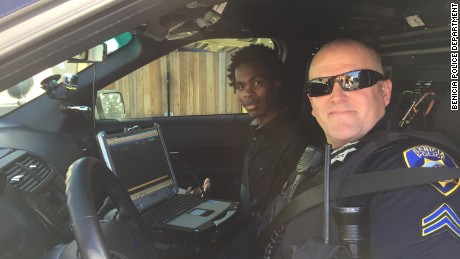 By now, the story hardly needs telling among Jourdan Duncan’s family and friends.

Late one night last September, the teenager had been walking back to his parents’ home from work, a seven-mile trip from Benecia to Vallejo, Calif.

Duncan had been making the long commute on foot each day since July, after the timing belt and an engine valve on his 2001 Volvo had broken. Without enough money for repairs, he at first got a few rides from friends and co-workers – but soon decided he would try to walk to avoid burdening others.

“To me, it was like a challenge to see if I was willing to do whatever it takes to get to work,” Duncan, now 19, told The Washington Post then.

Day by day the walk became easier, and gradually he thought little of the two-hour-and-15-minute journey each way. He would have no way of knowing that his daily routine would first prompt a surprise gift from the local police – then inspire thousands of people to give far more.

But to Cpl. Kirk Keffer of the Benicia Police Department, who was patrolling that area that September night, the sight of a lone pedestrian in that part of town after 11 p.m. was startling.

“Usually in the industrial area there’s no foot traffic, so it was kind of weird to see someone walking around on foot,” Keffer told The Post then.

He stopped his patrol car and called out to Duncan to ask if he was OK.

Duncan admitted later that he was nervous.

“I thought, OK, um, did I do anything wrong?” he said in September. “Is he going to put me in cuffs? I didn’t do anything bad.”

Duncan explained to Keffer he was walking seven miles home, just as he did every day. Shocked, Keffer cleared out the passenger seat in his patrol car and offered Duncan a ride home.

On the ride home, Keffer got to know the teenager: Duncan had just graduated from Jesse Bethel High School in 2015. He had gotten a job at Pro-Form Laboratories in May, where he worked on the packaging line from 3 p.m. until about midnight. He was saving money for college and enjoyed being around his co-workers, he said – but really wanted to be an officer with the California Highway Patrol, to follow in the footsteps of some relatives who were in law enforcement.

By the time Keffer pulled up to Duncan’s parents’ house that night – all of 15 minutes later, by car – the police officer was impressed. He commended Duncan on his work ethic, dropped him off and drove back to the station.

Still, he couldn’t get Duncan’s commute out of his head. Keffer mentioned his interaction to his shift supervisor, who, like Keffer, happened to be a board member of the Benicia Police Officers’ Association.

“So I hit him up and say, ‘I just had this contact with this young man,’ ” Keffer said then. ” ‘He’s walking five hours a day, and I think it should be rewarded. What if we help him out?’ ”

They emailed the rest of the board to seek approval to buy a bicycle. It was, he said, one of the fastest votes they’ve ever taken: Within an hour, enough board members wrote back in agreement. And so, the following day, Keffer visited Wheels in Motion, a local bike shop, to pick out a $500 bike with a reliable gearing system that could handle Benicia’s steep hills. The bike shop’s owner loved the teen’s story so much that he also donated a lighting system, brake light and helmet.

Keffer and some other Benecia police offers surprised Duncan after work a few days later.

“We would like to acknowledge your hard work and dedication for what you do and setting the example for kids your age,” Keffer said they told him. “Hopefully this’ll make your trip easier.”

Duncan said he was bowled over by the gift, but also stymied by the attention. Several local news stations wanted him on their shows. Normally reserved, he shyly agreed to talk to all of them – “I was so nervous; I’ve never been on TV” – but couldn’t help but think: They want to interview me for walking?

His commute was cut down to an hour. That, as far as most people were concerned, was where his story came to a happy ending.

But the police officers weren’t done with Duncan. A few days after The Post’s story ran, the police association started a GoFundMe account to raise money for the teenager to repair his car.

The donations kept rolling in.

“The community just had an outpouring of love for him,” Keffer said Tuesday. “It was something the community needed, something positive at the time.”

They moved the goal one last time.

“We have now raised the goal to $50,000 with hopes that Jourdan can use this gift to help him achieve his dreams beyond fixing his car,” the association posted in an update on the GoFundMe account about a month after it was started. “Fund his educational aspirations and dreams.”

If Duncan was shocked by the bike, he was nearly speechless at the GoFundMe donations that continued pouring in last fall.

According to Keffer, Duncan’s friends half-jokingly suggested that he take the money and buy a BMW. His father said he should stick to a reliable car, such as a Honda.

At some point, Duncan consulted Keffer.

“It’s your money,” he said he told the teen. “I would never tell you not to, but just do what you want.”

Duncan soon spotted a 2003 Volkswagen Passat for sale on Craigslist. It was gray, with 112,000 miles on it and “seemed like my type of car,” he said. He went to check it out.

Keffer was proud of his decision.

“Just something sensible, something he can maintain. He owns it outright,” Keffer said. “He kept the money in the bank . . . It feels good to know that Jourdan trusts me.”

In January, Duncan also started his first semester at Solano Community College. His first month, he was overwhelmed with how different it was from high school.

“I was so used to kids my age and everything,” he said. “Here, they carry themselves more with pride, with care and everything. It just made me feel like, okay, I have to step up to the plate.”

Duncan’s class schedule keeps him busy most days, but he has continued to work his night shift at Pro-Form Laboratories. The car, he said, is what makes it possible to zip between his classes at two of Solano’s campuses – in Fairfield and Vallejo – and his job in Benicia.

Duncan’s ultimate goal is to transfer to a four-year college, major in engineering and then try out for the police academy. And every so often, he still stops by the Benicia police headquarters to catch up with Keffer.

“I’m just super proud of him. He could have went so many different ways with that money,” Keffer said. “He stopped and asked for my opinion, which meant a lot. . . . He’s got a bright future ahead of him. I just hope that he continues down this path.”