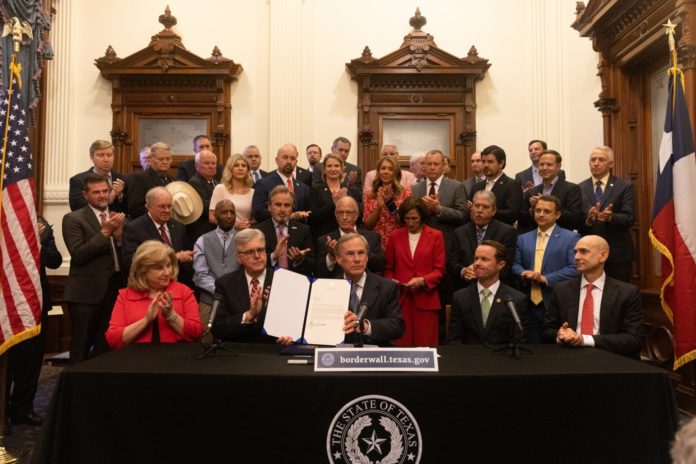 Texas Governor Greg Abbott today held a press conference in Austin where he announced several key components of the State of Texas’ plan to build a border wall.

“The Biden Administration has abandoned its responsibilities to secure the border and Texans are suffering as a result,” said Governor Abbott. “The problems along the border are only getting worse due to President Biden’s inaction. Property is being destroyed, deadly drugs and illegal weapons are being smuggled into communities throughout the state, law enforcement is having to redirect their resources, and county judges and mayors are facing skyrocketing expenses. Texas is doing more than any state has ever done to protect the border, but it is clear that more is needed. In the Biden Administration’s absence, Texas is stepping up to get the job done by building the border wall. Through this comprehensive public safety effort, we will secure the border, slow the influx of unlawful immigrants, and restore order in our border communities.”

Due to Biden's open border policies, I just announced Texas' plan to continue securing the border & build the wall.

During the press conference, the Governor signed a letter to the Texas Facilities Commission directing them to hire a project manager to oversee construction of the Texas border wall. This program manager will lead the process of planning and executing the project, and will hire the contractors and subcontractors needed to build the wall. Once hired, the program manager and contractors will identify state land and land that private landowners and local governments can volunteer for the wall.

Additionally, the Governor, Lieutenant Governor Patrick, Speaker Phelan, and Senator Nelson, and Representative Bonnen signed a letter during the press conference authorizing the transfer for $250 million as a down payment to launch the construction of the border wall and hire a program manager and contractors. Governor Abbott also noted that the state budget allocates 1.1 billion dollars towards border security — a record for the State of Texas.

The Governor also signed a letter to President Joe Biden demanding the immediate return of any land taken by the federal government to build the border wall. Once returned, Texas will talk to those property owners about the possibility of Texas using that land to build the wall.

Governor Abbott also announced a donation page, www.borderwall.texas.gov, where anyone can voluntarily donate to the construction of the border wall. The fund will be maintained by the Texas Division of Emergency Management.