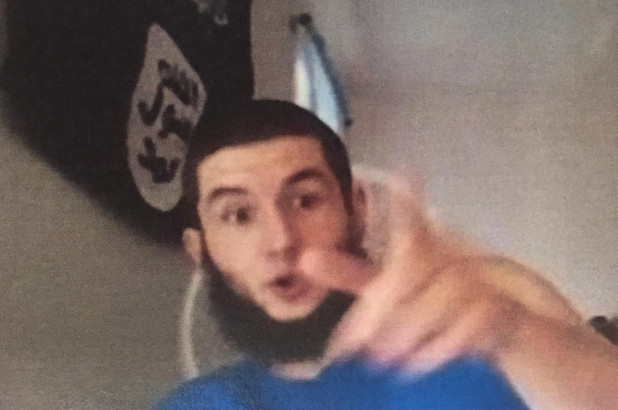 Sajmir Alimehmeti Amassed Combat Knives and ISIS Propaganda in His Apartment, Facilitated Equipment Purchases by an Individual He Believed Was Traveling to Syria to Fight with ISIS, and Conspired with Chelsea Bomber Ahmad Khan Rahimi to Distribute Terro

Sajmir Alimehmeti, aka “Abdul Qawii,” 26, was sentenced to 22 years in prison based on convictions for attempting to provide material support to the Islamic State of Iraq and al-Sham (ISIS), and attempting to fraudulently procure a U.S. passport to facilitate an act of international terrorism. Alimehmeti pleaded guilty on Feb. 21, 2018, before U.S. District Judge Paul A. Engelmayer, who imposed today’s sentence.

“Alimehmeti was determined to support ISIS. He attempted to travel overseas to support the terrorist group, he assisted another person he believed to be a fellow ISIS supporter to prepare to purportedly travel to join ISIS, he lied on his passport application so he could get a clean passport to ease his efforts to travel overseas to join ISIS, and while in pretrial detention, he conspired with another terrorist to spread ISIS propaganda. With today’s sentence, he is being held accountable for his crimes,” said Assistant Attorney General for National Security John C. Demers. “The National Security Division will continue to work with our partners to identify, disrupt and hold accountable those who seek to provide material support to designated foreign terrorist organizations. I want to thank the agents, analysts, and prosecutors who are responsible for this case.”

“Bronx resident Sajmir Alimehmeti took the position of an adversary to the United States and its values. Alimehmeti’s contempt for the U.S. led him to travel overseas to support ISIS’s terror campaign, eventually purchasing military-type weapons and assisting another to get travel documents, equipment, and encryption technology to fight with ISIS in Syria,” said U.S. Attorney Geoffrey S. Berman for the Southern District of New York. “Even after his incarceration, Alimemehti continued his supportive conduct for ISIS by working with convicted Chelsea bomber Ahmad Khan Rahimi, to distribute ISIS propaganda in prison. I sincerely commend our law enforcement partners for their commitment to detecting and apprehending those who support the disruption of American life through brazen acts of terrorism.”

“Sajmir Alimehmeti was so committed to supporting and furthering the ISIS agenda, that when his multiple attempts to travel overseas raised enough red flags to deny him entry, he turned to assisting someone he thought shared his same objective. Unbeknownst to him, however, that someone was an undercover employee,” said FBI Assistant Director-in-Charge William F. Sweeney Jr. “Today’s sentencing is a welcome end to this case, and another successful outcome for the many agents, detectives, and analysts on FBI’s JTTF in New York. Their work and our extensive partnerships are essential to keeping New York City and the nation safe.”

“Sajmir Alimehmeti betrayed the country he called home by trying to travel overseas to join ISIS, a brutal terrorist group at war with the United States,” said NYPD Police Commissioner Dermot F. Shea. “When that failed, Alimehmeti deliberately assisted another individual he believed was traveling to join ISIS. At the same time, the investigation revealed he was acquiring tactical knives, handcuffs and equipment indicative of efforts to prepare for an attack here in New York City. This case is another example of the relentless efforts of the Joint Terrorism Task Force and the NYPD’s Intelligence Bureau to prevent terrorism before it occurs.”

As reflected in the criminal Complaint, Superseding Indictment, court filings, and statements during court proceedings:

In October 2014, Alimehmeti attempted to enter the United Kingdom but was denied entry after U.K. authorities found camouflage clothing and nunchucks in his luggage. About two months later, in December 2014, Alimehmeti was again denied entry into the United Kingdom, this time after U.K. authorities found that his cellphone contained images of ISIS flags. Further forensic examination of the contents of the cellphone and Alimehmeti’s laptop computer showed numerous indicia of Alimehmeti’s support for ISIS, including a photograph of Alimehmeti with an ISIS flag in the background, images of ISIS fighters in the Middle East, a photograph of Alimehmeti making a gesture of support for ISIS, various files relating to jihad and martyrdom, and an online messaging exchange in which Alimehmeti attempted to assist another ISIS supporter to travel to Syria to join ISIS, by providing contact information for an ISIS affiliate who could facilitate the travel.

After returning to the United States, Alimehmeti continued to support ISIS. Among other things, Alimehmeti displayed an ISIS flag in his apartment in the Bronx and, in the course of recorded meetings with undercover law enforcement employees, Alimehmeti played multiple pro-ISIS propaganda videos on his computer and his cellphone, including videos of ISIS fighters decapitating prisoners, and Alimehmeti also indicated that he was interested in radicalizing other individuals in the Bronx area. Alimehmeti also made repeated purchases of combat knives and other military-type equipment, including masks, handcuffs, a pocket chainsaw, a wire pocket saw, and a rucksack designed for tactical combat. Alimehmeti stockpiled such equipment at his apartment in the Bronx.

In October 2015, Alimehmeti applied for a U.S. passport, falsely claiming in the application that his previous passport had been lost. Alimehmeti later told an undercover law enforcement employee that his prior passport had not been lost and, instead, that he was applying for a new passport because he believed the rejection stamps in his existing passport resulting from his attempted entries into the United Kingdom would make it difficult to travel to ISIS territory.

In May 2016, Alimehmeti attempted to assist an individual who was purportedly traveling from New York to Syria to train and fight with ISIS but who was actually an undercover law enforcement employee (the “UC”). On May 17, 2016, Alimehmeti met with the UC in Manhattan. Alimehmeti helped the UC locate stores so the UC could purchase supplies to use while traveling to, and fighting with, ISIS, including a cellphone, boots, a compass, a bag, and a flashlight, among other items. Alimehmeti then brought the UC to a hotel in Queens so the UC could purportedly meet with an individual who was preparing travel documents that the UC would use to travel to Syria to join ISIS. Alimehmeti gave the UC a piece of paper with his name and contact information, and asked the UC to provide that information to the purported document facilitator. Alimeheti explained that he wanted to travel to Syria and join ISIS, stating “I’m ready to . . . go with you man . . . you know I would. I’m done with this place.” After leaving the hotel in Queens, Alimeheti brought the UC to JFK Airport, via public transportation, so the UC could begin the purported journey to ISIS.

Following Alimehmeti’s arrest on the charges in this case in May 2016, the FBI executed a search of Alimehmeti’s Bronx apartment pursuant to a judicially authorized search warrant. The FBI found in the apartment, among other things, an ISIS flag that was displayed on a wall in the apartment.

In 2017, while Alimehmeti was incarcerated and awaiting trial, law enforcement learned that Alimehmeti had worked with Ahmad Khan Rahimi inside the prison to aggregate and distribute terrorist propaganda that was part of the evidence in their respective cases and produced to them during discovery. Rahimi was sentenced to life in prison, in February 2018, for planting a series of bombs in New York and New Jersey in September 2016. Law enforcement also intercepted a letter that Alimhemeti sent to Rahimi, after their propaganda-distribution scheme inside the jail was thwarted, in which Alimehmeti referred to himself as the “ISIS balla,” indicated that he had destroyed evidence of their propaganda distribution efforts, and expressed hope that both convicted terrorists would ultimately achieve so-called martyrdom through another act of terrorism.

In addition to the prison term, Alimehmeti was also sentenced to five years supervised release.